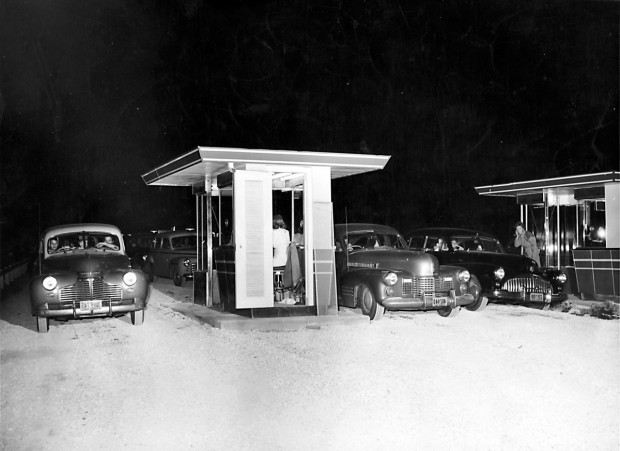 The Drive-In was opened on July 30, 1948 with Bud Abbott & Lou Costello in “Pardon My Sarong”. On April 19, 1949 it opened as the Decatur Drive-In with another Abbott & Costello movie “The Noose Hangs High” & Teresa Wright in “Pursued”. It was the first drive-in theatre to be operated by Kerasotes Theatres. It was closed in September 1985.

I uploaded the aerial photos from 1965 for this drive-in and the 121 Outdoor.

Decatur Drive-In Grand Opening night was July 30, 1948 with 2,000 cars coming but not enough spaces for them to watch “Pardon My Sarong” with Abbott & Costello, Architected by William M. Weidemeyer, the 100 foot high original tower was patterned after a New Jersey drive-in which provided artificial moonlight without interfering with the on-screen image.

Cars entered the center of the theater instead of the front at opening to help get the cars to the ramps with all parking space numbers illuminated. The name of the theater was selected in a contest in which original and innovative names must have all been tossed out. The theater was the first for the Kerasotes Theater Circuit and such a big success and prompted Kerasotes to build a second ozoner in the city. Creativity and differentiation were still not apparent with the name Outdoor Theatre selected for that theater.

In 1955, the the Decatur D-I went to a Mancovision aluminum screen to accommodate widescreen presentations including CinemaScope and to try to get a brighter image. The family-centric location had a train, ferris wheel, merry-go-round and other playground fun for the kids.

Grand opening ad from the date povided by dallasmovietheaters in photo section. You can zoom in at https://herald-review.newspapers.com/clip/4297389/decatur_drivein_opening/

The Decatur Drive-In operated through the 1985 season, closing in September of that year. The last movies to play there were a double-feature of “Return of the Living Dead” and “The Stuff.”

The property was purchased by the city and demolished one year later in November 1986, to make way for a parking facility for city vehicles.