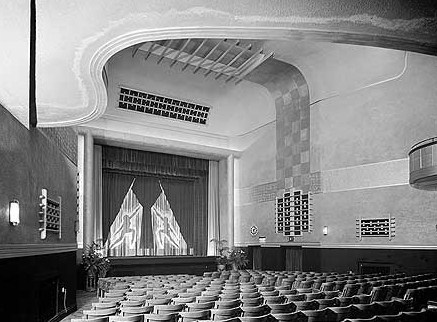 This Odeon Theatre was one of the smallest built for the Oscar Deutsch chain of Odeon Theatres Ltd. It opened on 5th October 1936 with a live performance on the small stage by Jack Payne and his Band. The opening film for the remainder of the week was Charles Chaplin in "Modern Times".

The Odeon Theatre was located at the edge of the town centre, close to the independently operated Picture House. It had a good position on the corner of Newport Road and Bridge Street. The exterior was brick with windows edged in white stone and there were bands of white stonework sweeping horizontally around the corner façade of the building. Inside there were very tiny foyers and the auditorium was very wide at the rear and narrowed at the proscenium. Seating was provided for 535 in the stalls and 421 in the circle. The projection box was at the rear of the stalls, beneath the circle. Decoration was rather plain, with a couple of grilles on the side walls for air extraction and one in the main ceiling. Lighting was via a couple of coves in the ceiling which contained hidden lighting.

The Odeon was temporarily closed in February 1946 when it suffered damage by flooding. Apart from that it led an uneventful life.

It was disposed of by the Rank Organisation in July 1981 and was taken over by the Hutchinson Leisure Group who re-named it Astra Cinema. In December 1981 it was tripled with 435 seats in the former stalls and two mini cinemas in the former circle seating 170 and 168.

In 1988 it was taken over by Apollo Cinemas and re-named Apollo Cinema. The downstairs cinema was closed and became a bingo club for a couple of years, during which time the two mini cinemas in the former circle remained open. The bingo operation gave way to films again in 1990 and all three screens were again open, with seating for 305, 170 and 164. In January 2014 it was taken over by the Curzon Cinemas chain and renamed Stafford Cinema. It was closed on 18th December 2017 with “Star Wars:The Last Jedi”'

In April 2018 it was taken over by Anthony Harris of AJH Cinema and following minor renovations it reopened 26th May 2018. It was closed on 28th February 2019.

Further to the Comment below on 10th August 2019 by ‘cinemasamuk’, the cinema was subsequently taken over by Sam Lavington (Cinema Sam), who vowed to refurbish the building while preserving its history. He was quoted as saying “I’ve actually come out of retirement for this, I first heard about the cinema through the grapevine from other cinema owners. I love the place, it’s a beautiful building and I want to preserve its history by sympathetically redoing it, though its going to take time. It’s been so neglected but I’ve had the gas people in to measure up for new heating and in the meantime we have temporary heating in place that is much better than previous versions. We are repainting and have a new coffee bar, a counter on the first floor as well as trying to refresh the toilets. But Screen 3 will be closed permanently until its renovated. We will be run traditionally and not automatically”.

The Stafford Cinema duly re-opened on 25th October 2019 for the half-term school holidays with two screens showing children’s favourites. “The Addams Family” in one and “Abominable” (matinees) in the other, while, in a lovely touch which I hope was appreciated by the town’s film-lovers, the classic musical “Singin' in the Rain” played in the evening.

On 15th November 2019, Sam Lavington acquired a three year lease (expiring October 2022) from the landlord, Eros Properties Limited. Screen 3 remained closed for its extensive refurbishment. The building was then put up ‘For Sale’ by auction on 14th February 2020, with Francis Beatty, the council’s cabinet member for economic development & planning, remarking that “This is a prominent site in Stafford and we would like to see the cinema building utilised quickly - and it would be good to see a leisure offer sitting alongside any proposed residential scheme which will be of benefit to our community”. So clearly the council sees no future as a cinema! However the guide price at the auction, £350,00, was not achieved and the building was not sold.

Meanwhile Mr. Lavington, while retaining the Stafford Cinema name, has set up a business as the Cinema Heritage Trust, with the aim of purchasing the building for the people of Stafford. Unfortunately, he also admitted he will be unable to keep up the ongoing costs for much longer. The good news was announced in February 2021 that the freehold on the building had been purchased and Sam Lavington would continue to operate the cinema. It was announced on November 4, 2021 that the cinema would not be reopening.

I totally agree with Chris regarding Ray Faulkner. His knowledge of projection was second to none and a really nice person.His help in my early years as a projectionist at the Apollo was invaluable. Much missed.

The conversion into a Triple was designed and carried out by Modernisation Ltd., The Freeze – Greene company.

I’m sorry to report the cinema has now closed. It has been placed on the market for £750k. The future doesn’t look good.

The Cinema has now reopened

The Cinema was not built for Odeon…This was one of 7 cinemas built for the Clifton Syndicate. Sidney Clift’s business partner Leon Salberg thoughtlessly went and died. Oscar Deutch who was a close friend was appointed as Chair by Clift. J Arthur Rank launched a Rights Share issue November 1947 to purchase the oddities of the Circuit Hmm over 300 companies each Odeon was a separate company. A cleaver system devised by Sidney Clift to finance them.

AJH Cinema Limited took on the historic venue after it closed at the end of 2017. Trevor Harris, whose son Anthony ran the cinema, said: “We were in discussions with the landlord for weeks but at the end of the day the facts and figures just didn’t add up. There was no way we could keep going, we just couldn’t sustain the losses anymore."

“We lowered the price of tickets to £5 and people still didn’t come. Films we were relying on in January went right down the pan, the cinema figures all over the UK are diabolical and the heating system in the old building hasn’t helped.

“We’d like to thank all our customers and those that supported us though and wish the landlord well. It was one of the original Odeon’s built and we hope to see the building back in use as a cinema again soon.”

im hoping to reopen this cinema lat this year, providing heating can be sorted out at reasonable expense, Cinema heritage trust

Up for auction on 12th February, with pre-application advice received by the council for a multi-storey mixed-use conversion comprising ground floor retail and residential above. Is this cinema of sufficient originality to be put forward for listing? https://www.stokesentinel.co.uk/news/stoke-on-trent-news/weve-put-lot-work-place-3799413

Good News after long and extensive talks with the property owners, an agreement has been reached to prchase the complete freehold of this cinema site and it will remain in the same capable hands of sam Lavington and remain as a Cinema, also there is discussions to open a “Movie Shop” in one of the retail units attached to the cinema. The new number for the cinema is 07708192652 new photos will be added soon.

4th November: ‘It is with a heavy heart that we have to announce that we will not be able to reopen Stafford Cinema. We have done our level best, we have carried out many works to rejuvenate the building and update the facilities, but unfortunately after being turned down for a BFI grant 3 times, the closure during covid and now there are many other issues with the building itself which makes it impossible to keep throwing money at it. We thank you for the time we were open for supporting us. Hopefully this won’t completely be the end for the story of Stafford Cinema, but certainly for now the doors have to close.’