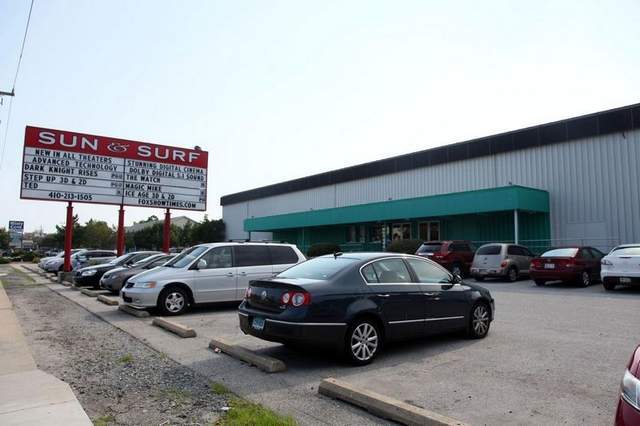 Originally opened on August 24, 1972 by Schwartz Theatres of Dover, DE. The opening movie in the Surf Cinema screen was “Carnal Knowledge” starring Jack Nicholson. It was initially a twin screen theatre, with the Sun Cinema screen opening on August 25, 1972. In 1974 it expanded to four screens. In 1980 it was taken over by Fox Theatres (Reading PA) and four more screens were added in 1982. The World Premiere of “Violets Are Blue” with Sissy Spacek and Kevin Kline was held at the Sun & Surf Cinema. It was shown five days before the National release date. Tickets were $40.00 and included a reception after the movie. Most of the movie was shot in Ocean City and the areas around it.

The theatre was extensively refurbished in 2015. Fox Theatres, based in Reading, PA. announced in July 2022 that the Fox Sun & Surf 8 Cinema would close on September 5, 2022. The property has been acquired by a local hotel developer.

Info from the July, 1986, issue of Boxoffice Magazine: this theater, then called the Sun and Surf Cinemas, was acquired by Fox Theatres (a Reading, Pennsylvania-based company founded by Richard A. Fox in 1958, and not related to the earlier Fox circuit founded by William Fox) in 1980, when it was a four-screen house. It was expanded to eight screens in 1983. I don’t know who owned it before Fox, nor what year Carmike took it over.

Well, if CARMIKE has it is probably closed today or nearing its end.:Look at that crappy marquee!

The Sun & Surf was originally built as a twin by Schwartz Theatres of Dover Delaware sometime in the late 60’s or early 1970’s. It was then expanded to four screens in the mid 70’s.

I went to this theater a number of times when I was teenager. My family used to vacation in Fenwick Island and this theater was within walking distance of our cottage. Also, a friend of mine worked there, and I was pretty friendly with most of the staff. I saw Roger Rabbit, Die Hard, Young Guns, one of the Nightmare on Elm Street movies, Midnight Run, Darkman, and a little obscurity known as North Shore here…

I’m going back to Ocean City this summer! Anyone know if they kept the theaters the same inside or if they’ve upgraded to stadium seating, etc.? Hoping it’s the way I remember. :)

Added pics of my May 2016 visit, with recliners

Tragic news. Wonder how the Gold Coast Mall will accommodate summer crowds on rainy days, or maybe business just dipped all around the city. :(