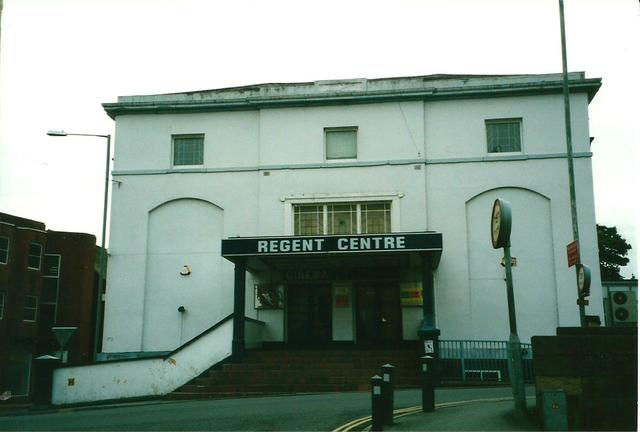 The building is located next to the Long Bridge across the river Severn and was originally built and designed by Thomas Penson in 1830-32 as a Flannel Exchange Mart, later becoming a Public Hall and then a post office. In 1919 it was converted into a concert and theatre hall, known as the Scala and opened at Easter 1920. Cinema use came quickly and by 1921 it was advertised as the Scala Picture House. Seating was provided for 500, the stage was 18 feet deep and there were two dressing rooms. There was a ballroom located in the basement.

In 1936 it was taken over by an independent company operated by Guy Baker, known as Paramount Picture Theatres and was closed for re-modelling.

The building was stripped out and re-built internally. It re-opened on 21st June 1937 as the Regent Cinema with George Arlis in "His Lordship". Advertised as ‘Newtown’s Modern Luxury Cinema’ it could now seat 800 in stalls and circle. The proscenium was 27 feet wide and the stage area remained the same as before. The basement ballroom was also retained.

By mid-1977 it was announced that film performances would be reduced and the Regent would be programming more live shows and wrestling. By 1979, bingo had been introduced on Friday evenings and in January 1979 a Pantomime was staged. In 1980, the ballroom was closed and was used for storage.

In late summer 1983, the owner Guy Baker died and the Regent was closed and put up ‘For Sale’. It was purchased by a local syndicate and re-opened as a 210 seat cinema on 15th December 1986, using the circle seating only. Renovated in the early 1990’s it now has a second screen seating 40 persons in another part of the building. The ballroom is now a nightclub.

The Regent Cinema is designated as a Grade II listed building.

I was brought up in Newtown and was projectionist/odd job man at the Regent in the late 1960s/early 1970s – so can offer the following clarifications and additions:-
The Scala occupied only the rear part of the building (the portion that became the Regent’s stage). Local oldies used to tell of the fun to be had in pushing over the unfixed bench seating – if you pushed the back row the rest went over in a domino effect. It could never have held 200. There was no stage.
Paramount Picture Theatres (North Wales) was founded by a Mr Baylis. Guy Baker acquired it soon after the second world war. It had 21 theatres in 1952 but had dwindled to 9 by 1970. Paramount also owned the town’s other cinema, the Victoria Hall in Park Street (demolished c1975). This closed when the larger Regent opened.
The 1937 conversion created a 560 (not 800) seater theatre (210 in the circle) with stage and dressing rooms – two small and two larger ones. There was no ballroom – there were the remnants of a sprung floor dating from one of the building’s previous incarnations. The basement was used for storage from 1937 until the River Severn decided to flood (1964 I think)and drenched a local furniture store’s carpet stock.
The first manager was George Black – a Londoner who soon became a Newtown institution. The Regent was commonly known as Georgie’s and he was to be seen every morning, in pinstripe suit and black homburg, carrying the takings to the bank in a rather obvious cloth bag. Georgie stayed at the Regent until his death in the late 1960s. Mrs Black ruled the box office.
For years the cinema ran a split week – one programme Mon, Tues, Wed which was then crossed over with its sister cinema in Welshpool (The Pola) for Thur, Fri and Sat.
Bingo started in the mid ‘60s and was on a Thursday night (my night off) – the first session was graced by Pat Phoenix of Coronation Street. The theatre always ran a limited programme of stage shows – Charlie Chester appeared there during the war and there were concerts and variety shows. There were locally produced pantos from the early 1970s until the closure in 1983.
The current night club occupies the stalls area and there’s a pub in the foyer basement.

Closure date in 1983 was 1 October when all cinemas in the chain closed.