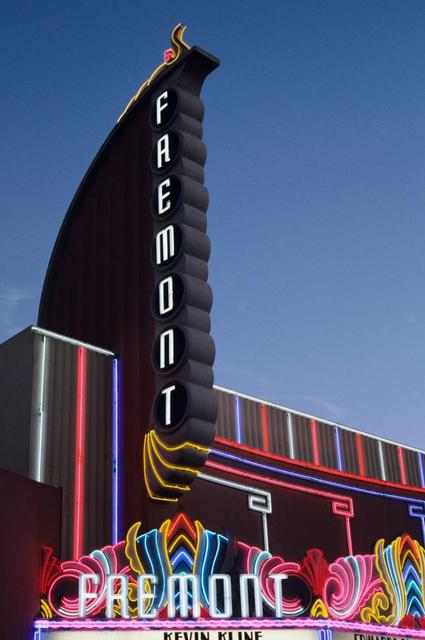 Construction began in 1940 and the Fremont Theatre opened May 29, 1942. It has the large original main theatre that is painted inside. In recent years three more screens have been added in an adjacent building, making this a four-plex showing first run movies.

The theatre is also used for the San Luis Obispo International Film Festival and has been operated at different times by Fox, National General, Mann, and then Edwards Cinemas.

Now operated by the independent ‘The Movie Experience’ chain

On the DVD of the Laurel & Hardy film “A Haunting We Will Go” there is a “Movietone” newsreel showing the opening day for this theatre in 1940.

The Fremont opened during the war in 1942. Thanks for the tip on the “A Haunting We Will Go” DVD extra.

I was in SLO last week and drove by the Fremont. No movie was listed on the marquee, just forthcoming concerts and music events.

According to the Fremont’s Facebook page, the last film screened was “Birth of a Nation” Oct. 7 – 11.

I visited the Movie Experience’s website and nothing comes up when you click on the Fremont icon.

Anyone know more? I’d have to think someone would have made a post here if indeed the Fremont had been repurposed.

The website lists current films being shown at this theatre.

While I was stationed at Fort Hunter Liggett during the mid eighties,I watched quite a few movies here including Beverly Hills Cop,Ferris Buellers Day off,and a fantastic double feature of Teachers and Body Double. It was a beautiful theater with a gorgeous lobby. I see it pop up in films now and then.

There are no films currently being shown at this theater. Visit the Movie Experience website, click on the Fremont icon and you get nothing, just blank space. Seriously, has anyone seen a movie here since last October? Do tell.