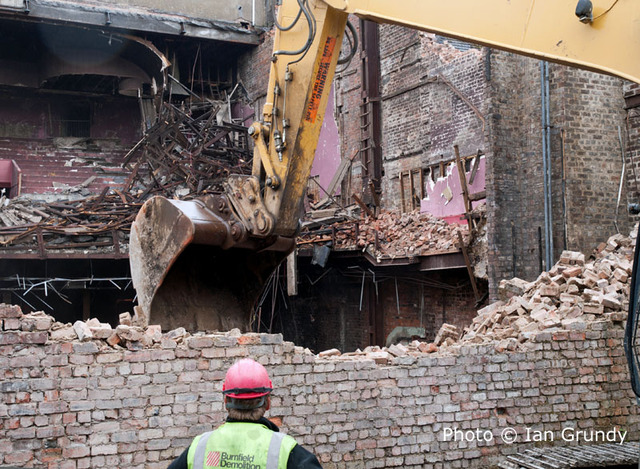 Located at Bridgeton Cross, an east end district of Glasgow. The Olympia Theatre of Varieties was typical of the Edwardian Baroque style variety theatres which were being built at the time. It opened on 18th September 1911 and had a seating capacity of 2,000 in orchestra stalls, dress circle and balcony. The Baroque style exterior in red sandstone, with its corner entrance and elaborate dome was designed by architect George Arthur & Son. The interior with its lavish plaster scrollwork was designed by noted theatre designer Frank Matcham & Company. It was equipped to show films from its opening.

In 1924 it was taken over by Scottish Cinema and Variety Theatres, later to become Associated British Cinemas(ABC), who would operate it for the remainder of its cinematic life. The variety acts were dropped and the Olympia became a full time cinema.

In 1938 its interior was considered ‘old fashioned’ for a modern cinema and it was gutted to have a new Art Deco style interior designed by Charles J. McNair and Henry F. Elder. There were troughs containing concealed lighting and desorative grilles on the splay walls beside the proscenium. The seating capacity was reduced to 1,689, with the removal of the balcony, and it re-opened on 21st November 1938.

The Olympia Cinema was re-named ABC in 1963 and was closed on 9th March 1974. The building stood empty and unused for over ten years and was converted into a bingo club from 1987. After County bingo operators closed it down it became a furniture store, but they moved out in 2000 and the building remained empty.

A tragic fire occured in the front stalls of the building on 30th November 2004, when a man, who was sleeping rough in the building, was badly injured, and died of smoke inhilation after a few days in hospital. Damage to the building was contained mainly to the front left hand side of the auditorium. A year earlier, Glasgow City Council had approved plans to demolish the auditorium and build flats on the site, retaining the facade. Demolition began in June 2011. A new library, offices & media centre were built on the site, which use the original façade as their entrance.

On 23rd March 1977, Historic Scotland designated the facade of the Olympia a Grade B Listed building.

Photos, including an explore of the badly water-damaged 1930s interior shortly before the 2004 fire, can be found here:

The planning application to convert the building to flats expires later this year (2008), and the building is once again on the open market, perhaps as a result of the successful bid Glasgow made for the 2014 Commonwealth Games – many of the venues and events will take place in the regenerated east end of the city where the cinema is located, currently a very rundown area.

Demolition is well under-way in June 2011. The façade will be preserved.

Two further photos can be seen on flickr, taken during demolition in June 2011

“had a seating capacity of 2,000 in stalls and dress circle”

I am pretty sure that there was originally two balconies in the 1911 theatre – the descriptions specify two tiers of balcony above stalls and circle which I suspect were two separated areas of the same tier. It would also be unusual for a Matcham theatre of this period to have just a stalls and a single circle. Much, but not all, of the stage area was incorporated into the auditorium in the 1938 rebuild so the drop in capacity makes no sense given that the auditorium space was increased, unless it went from a 3 level to a 2 level theatre.

Have loaded pictures of better times

I live a five minute walk from this old cinema , which was once a music hall in 1911, Ive been following the demolition of the insides of the hall in the past two years and the reconstruction if anyone wants to see the photos.. I have many even of the old cupola coming down and the new one going up into postion.. I also asked permission fur myself and some amateur photographers to go in and see the men at work on this massive project and we were granted access two months ago to go in and take photos… we were right on top of the bulding on the scaffolding..and will be at the opening dae in early October..

The building is now complete. Although only the facade remains, it sports a nice illuminated Olympia sign above the entrance, and a display on the building’s history just inside the entrance. It houses Bridgeton Library and a cafe on the ground floor, with offices above – including the home of Scotland’s amateur boxing and wrestling associations. The library also houses Scotland’s first BFI Mediatheque, where the public can view a vast selection of BFI archive material, as well as films from the Scottish Screen Archive – so another nice cinema connection.