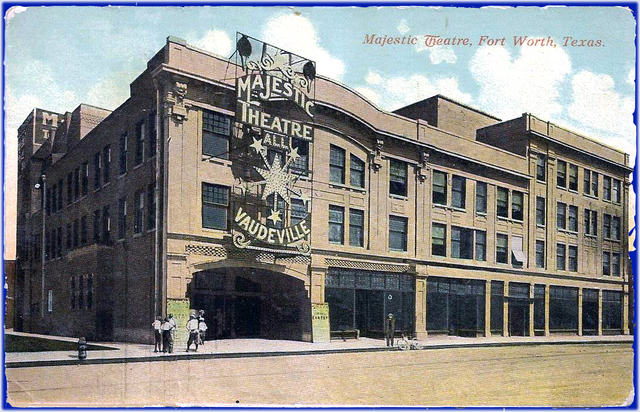 A 1940s view of the Majestic Theatre in Fort Worth. It was either on or near the location of the old Trailways Bus station.

Here is an undated postcard:
http://tinyurl.com/9y2kfh

Prior to the run-up to the construction of the convention center, someone tried to revive this theatre as a movie house. However, it appeared that they were unable to go up against the booking power of Interstate and Trans-Texas Theatres (who ran the other downtown theatres) and were only able to book less than stellar first-run pictures—pictures that were playing in the neighborhood theatres. This experiment didn’t last long!

1950’s photo added courtesy of Victor Valdez. Majestic at the end of the block.

The Majestic that opened in 1905 was a different house, located either on Jennings Avenue or on Throckmorton Street. The second Majestic, on Commerce Street, opened in 1911. The first Majestic was then renamed the Savoy Theatre, but had been gutted and converted into a garage by the end of the 1920s. It is not yet listed at Cinema Treasures.

This opened on November 28th, 1911. The grand opening ad, which claimed that it had the first diffused lighting system in the world can be found in the photo section. Thanks, Joe Vogel.

This web page has many photos and newspaper clippings about the second Majestic Theatre, though the primary focus is Harry Houdini, who made an appearance at the house in 1916. The Majestic was demolished in 1966, one of many buildings over several blocks razed to make way for the enormous Tarrant County Convention Center.

Many photos of the Majestic, including some taken shortly before and during its 1966 demolition, are linked from this web page about Fort Worth’s theaters.

February 1931 photo added via Funetorium Facebook page. Novel promotion for “Dracula”. They likely had patrons pretend to faint as well.