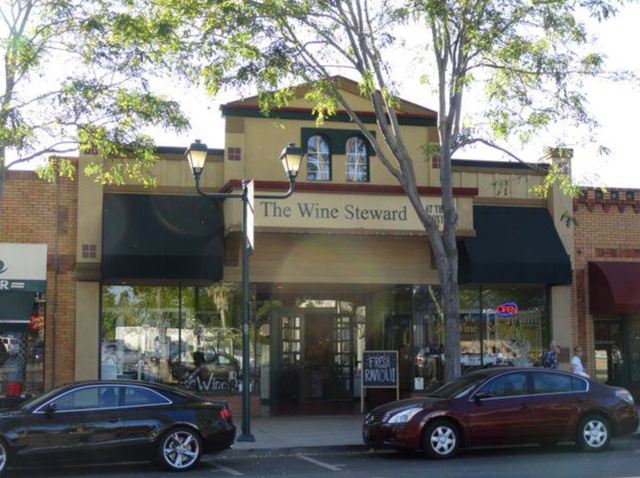 Amid Pleasanton’s vast manicured commercial landscape is a little historic downtown, where can be found the building that was once the Roxy Theatre. No longer recognizable as a theatre from the front, its original use is given away when viewed from behind, as a small stagehouse, complete with fly tower, can be seen.

The Roxy Theatre appears in the 1945 and 1951 Film Daily Yearbooks, but the existence of a stage clearly indicates a history which goes back further.

Since its theatrical use, the building has housed a hardware store, and later, an antique store. Currently, the former Roxy Theatre building houses a wine store.

This house opened sometime around 1920 as the New Lincoln Theatre. According to the “Walking Tour” brochure I picked up at the Downtown Pleasanton website, it was built about 1920 in the Mission Revival style. The brochure says that it became the Roxy in the 1940s, but the California Index has other information.

Issues of Motion Picture Herald from July 25 and August 22 of 1936 reveal that at that time the theatre was sold by Charles Chicazola to James B. Lima, and Lima then changed the name to Roxy (though Cal Index spells it “Roxie”.) The Downtown Pleasanton brochure gives the current address of the building as 641 Main.

The brochure also mentions two other theatres which once existed in downtown Pleasanton, both of which occupied buildings that are still standing:

1) 511 Main Street, built 1910, opened as the Gem Theatre and later became the Lincoln Theatre. No word on what happened at this site after the New Lincoln Theatre opened ca.1920.

The PDF of the downtown walking tour brochure has vanished from the Internet. Even though the link is still on this web page, it now produces only a 404 error. Maybe they will repair it someday. However, the page has a slide show of historic photos, and one of them is of the Roxy. Unfortunately, the slide show is totally automated so you have to just wait for the photo to come up in the stream, and then it stays for only a few seconds.

Film Daily Magazine of 16 July 1928 states that the Lincoln Theater Company plans to build a 400 seater in Pleasanton. This will be two blocks down from their existing Lincoln Theater, formerly -The Gem – owner Charles Chicazola. The City of Pleasanton Historical Inventory Staement states the Architects as Miller & Warnecke of Oakland. The Pleasanton Museum on Main has an opening day souvenir program dated 7 Dec 1928. The Film Daily 20 Jul 1936 show the sale by Chicazola to Jimmy Lima, owner of the Livermore Theater. The city business permit of 1 Jul 1936 shows JB Lima has renamed it The Roxy. A news article from the Oakland Tribune 19 Aug 1938 shows The Roxy and State theaters are traded to Julian Harvey Jr in exchange for interests in the Victory, Jose, and Liberty Theaters, of San Jose. A 2 Aug 1940, Pleasanton Times article shows Yates F Hamm has purchased the Roxy and State theaters from Harvey. The Roxy closes after it’s last show on 4 July 1955. It becomes Slettens Department Store until August 1959 when Daughtreys Department Store opens . The Mission Revival styling is removed, and by the early 1980s when Main St. Antiques moved in, is just a rectangular stucco slab . In 1999, it becomes The Wine Steward, and local Architect Charles Huff restores the Mission Revival facade. Since Dec 1999 it has been occupied by The Wine Steward, retailer and wine bar.

The correct address is 641 Main St.