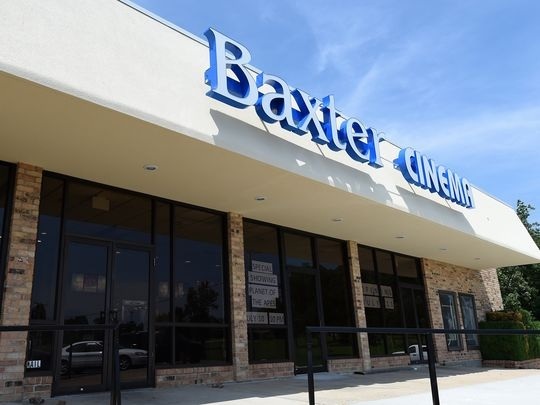 Originally opened by Commonwealth Theatres as the Village Twin on December 22, 1978. In May 1995 it was expanded to five screens as the Village 5 before being renamed Baxter Cinema. The Baxter Cinema was closed December 12, 2013 for renovations, and reopened July 11, 2014 with “Dawn of the Planet of the Apes”.

Will be reopening this spring as Baxter Cinema.

Per various issues of The Baxter Bulletin, this theater opened as the Village Twin December 22, 1978 with Commonwealth Theatres of Kansas City, MO operating it. It became a United Artists property in 1988 after it absorbed Commonwealth. The theater became a First International Theater property in the early 1990s, and it was in 1995 that it expanded into a five-screen property, reopening the weekend of May 27, 1995 with Braveheart, Johnny Mnemonic, French Kiss, Die Hard with a Vengeance, and Crimson Tide as its first five features. The theater soon became a Carmike property as Carmike Village 5. In 2013, the theater underwent renovations and reopened as Baxter Cinema, owned by the McCalmont family.