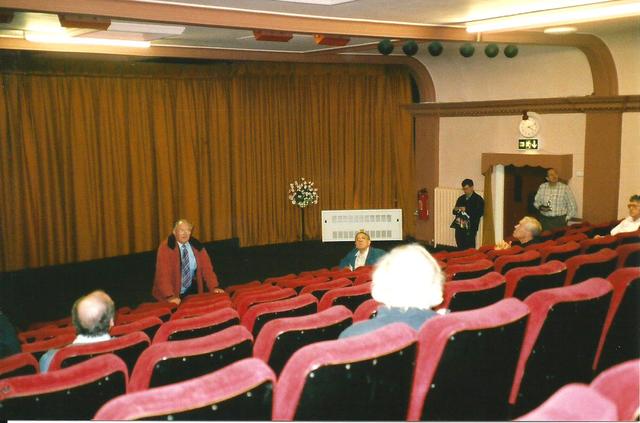 Located in Penrith, Cumbria. The Alhambra Theatre opened as a live venue in 1906, although it was run from opening to 1971 by Alhambra Theatre and Picture House Ltd, suggesting that films were at least part of the variety bills. It was sometimes referred to as the Palace of Varieties. From the 1920’s films became the mainstay of the entertainment provided.

Seating was provided for 800 in stalls and a single balcony of five rows plus side slips returned to the stage wall. The ceiling was flat coffered. By 1946 it accommodated 800 patrons. The stage was shallow at 5.2mtrs deep with a 9.83 mtrs wide proscenium arch. Tall stage doors for scenery exist in Duke Street.

In 1971 the Alhambra closed in favour of the Regent Cinema, and was minimally converted into a bingo hall which continued until 1984 when it was altered by sub-dividing the auditorium and entrance foyer to form a bingo hall in the stalls entered through the right side of the foyer and a 167 seat cinema using the five rows of the balcony plus an extra three rows in an extension forward of the balcony front. In the cinema the coffered ceiling was retained and effective use made of the plasterwork to create an ante proscenium framing the screen curtains. The Regent then closed leaving the Alhambra as the sole cinema in the town.

The Graves Cinema Circuit had been major shareholders in the Alhambra since the 1940’s and ran the cinema from 1984. In early 1999, a second screen seating 90 was added to the complex in an unused part of the building. Both screens have Dolby equipment.

More recently it was sold to Lonsdale Cinemas who in November 2007 renamed the complex Lonsdale Alhambra Cinemas for the screen side and Opera Bingo for the club part of the operation. All were open in 2008. By 2018 the bingo club had closed and it was an Indian restaurant named Indian Plaza. An adjoining shop was converted into a 3rd screen with 32-seats.

A third screen, seating 36, was added by incorporating an adjoining shop. All three screens open in 2021 - when these photos were taken