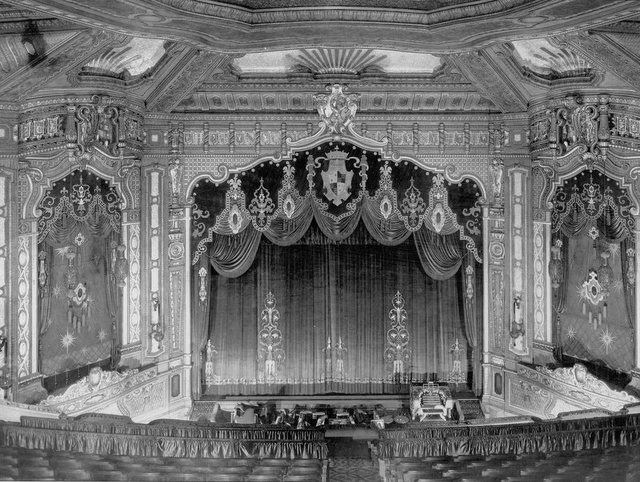 Opening night drew a spellbound audience of over 3,000. The program consisted of a movie “Pals First”, stage performances, a chorus, an orchestra, and solos on the organ. The mighty Wurlitzer 4 Manual, 23 Rank organ had a console decorated with silver leaf – a switch from the traditional gold – and jeweled lights on the organ screen sparkled on and off. The organ cost $115,000 and brought fame to the theatre.

Some of the theatre’s unusual decor was coated with silver leaf. The bright, sparkling emporium combined the decor of the traditional movie palace with “modern” architecture of the 1920’s. The ceiling’s wavy lines gave the impression of watery movement, while the silver leaf glistened above the stage.

The Ambassador Theatre was built for the Skouras Brothers with a capacity of 3,005 seats. At first it had live theatre with a combination of stage shows and movies. Actor Ed Lowry made his debut at the Ambassador Theatre as master of ceremonies. A few of the performers to grace the palace’s stage included Ted Lewis, Ben Feld, George Beatty and Eddie Peabody.

The year 1935 saw a change in the format. The Ambassador Theatre stopped its stage shows to become an exclusive movie house. At this time, the movie palaces were at their pinnacle. During the Depression, these temples of entertainment helped provide audiences with a means of escape from their problems.

As the 1930’s patron would enter from either N. 7th Street or Locust Street, he would walk into a marble lobby with a 40-foot high ceiling. As he moved forward he would see a marble staircase ascending to the balcony at the west side of the lobby. The marble steps with bronze rails adjoined the bevelled walls reflecting the Spanish Renaissance chandeliers. On the balcony he might have passed the ladies' restroom, a duplicate of Madame Pompadour’s salon at the Chateau Fontainebleau.

In the auditorium the ceiling appears to be suspended – an effect achieved by a series of 11 silver lead domes extending downward. The ceiling of silver leaf and deep blue color gives the appearance of a winter wonderland where everything glistens after a deep snow, the silver while reflecting the blue sky.

After finding his seat, he could listen to the organ which had a screen of glistening jewels. The 1,000 pipes were hidden in the walls to the right of the stage. Some pipes were only an inch in diameter, while others were as large as six feet. The organ was the largest of its kind and put out enough volume to fill this large auditorium. Because of its beautiful but monstorous organ, the theatre required extra electrical current. Therefore, it had the largest electrical switchborad of its size in the world, which controlled over 17,500 globes and with one of the largest cooling systems in the world.

All Cinerama seats were taken and replaced. Advertised as its main attraction was the half circular screen which could give the audience the sensation of hurtling down a roller coaster. The screen gave the viewer 146-degree-angle vision, in contrast to the Ambassador’s original screen which gave only 60-degree angle vision.

The remodeling cost $146,000, and the seating was reduced to 1,400 which provided more leg room and somewhat wider seats. The curved screen proved to be the most costly element of the Ambassador Theatre remodeling. It made theatre history in that it was larger than any of the other Cinerama screens in the nation and had to be carefully constructed. To give an indication of its size, this screen ws six times larger than the Ambassador’s old one, which measured 77 feet across and 28 feet from top to bottom.

In 1960, the Cinerama Theatre, the first major theatres built since the Fox Theatre in 1928, went up at 4218 Lindell Boulevard as part of a chain of Martin Theatres of California. It claimed to have the world’s largest indoor screen, which measured 100 feet on a curve. The two story building attempted to be a “modern” movie palace. It didn’t quite make it and is now demolished.

The Ambassador Theatre under the direction of the Arthur Enterprises Inc. made many attempts through the 1970’s to make it as a movie theatre and live concert venue but they all failed. It was closed in May 1976, and was added to the Register of Historic Places in 1983. The owners auctioned off all fixtures and fittings in 1989. In 1996, it was demolished along with its office building which turned to quite a task. The theatre was built inside the office building and was constructed to with-stand earthquakes and the demolition took longer than anticipated. The area the Ambassador Theatre once stood on is now a plaza for a large bank that was next door.

The theater’s destruction is one of the greatest architectural losses in St. Louis' history.

This theatre is unique and truly one of the more beautiful in American history. A tragedy it was destroyed.

The piano that was contained in the Ambassador organ was “worked ” on by some college students in the 1950’s leaving it in the organ maintenance room with it unstrung and with the plate out. So when the organ was bought by Pillsbury it was left and went down with the theatre. I used to tune the pianos there for concerts and got access to the whole theatre.

If anyone wants to get an idea of how it was to visit this theater and see its silver leaf auditorium (which was unique) they could check out the Ford Center (originally Oriental Theater) in Chicago. There are elements in the Ford Center Auditorium (it uses the traditional gold leaf)which are suggestive of how this theater appeared while it was still in operation.

While the layout of the Ambassador and Oriental Theatres were somewhat similar, the decoration of the two certainly weren’t. The Ambassador had a “Spanish Carnival” design, the Oriental, as Ben Hall described it, a “hasheesh-dream décor.”

I’d like to use your 35mm photos in a book project. Please email me at

New Showcase Presentations in St. Louis article includes mention of the Cinerama and 70mm engagements here at the Ambassador (and other St. Louis area cinemas).

For folks who are interested in seeing more images from the Ambassador’s exterior-Larry Giles, who salvaged much of the architectural facade has an updated website with photographs from every stage of the salvage operation: http://web.nationalbuildingarts.org/recovery-projects/ambassador-building/

This theater stopped advertising movies in either of St. Louis' largest newspapers on Wednesday, January 16, 1974, with Fred Williamson in THAT MAN BOLT.

In response to bigrose’s inquiry of what was showing at the Ambassador the extraordinary night of Tuesday, August 14, 1945, the theater itself was having quite a stacked marquee that day. In addition to its regular double-feature of teen star Peggy Ann Garner in JUNIOR MISS and Gloria Jean & WIZARD OF OZ canine Toto in EASY TO LOOK AT, there was a 8:30pm sneak preview of Cornel Wilde in A THOUSAND AND ONE NIGHTS along with the recent Columbia musical-comedy TEN CENTS A DANCE (not to be confused with a 1931 version starring Barbara Stanwyck).

Since it appears that many downtown St. Louis theaters, including the Ambassador, had gone towards blaxploitation-genre films during the 1970s, and a CT contributor going by the name ‘Noir’ on several theater pages here had opinions as to why this had occurred, I would also refer to a article in the St. Louis Post-Dispatch, “Black Trend in City Theaters,” from the Sunday, January 2, 1972 edition, pp. 4I. Although ultimately the article presents nothing new, it does quote local theater company staff and discusses the wider range of African-American film types and personnel that were then being introduced into the commercial film market.

Was lucky enough to visit the theater in the mid 80’s during a THS convention. Would love to have seen it when it was still operating. At least you guys have a few palaces .Here in NYC all have been torn down in the name of progress. The whole city is going down the drain so this should have been expected . Shame this beautiful structure was sacrificed in the name of progress.

Most major cities have made terrible theatre decisions.