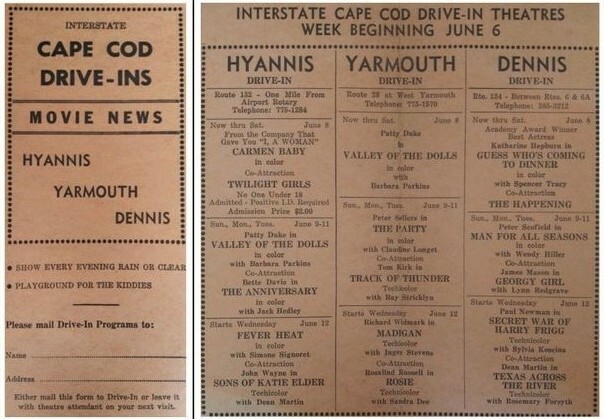 Located on Route 132 in Hyannis. Had Sunday church services there for many years. Was built and operated by Interstate Theaters Boston.

How does one hold a church service in a drive-in?

They used to put the preacher on the roof of the projection room building. All the cars would face the center off the theater. The preacher would use a mike fed to the speakers (in the old days)
Music was also fed thru the system.They had soloists also. I don’t remember if the concession was open.The church was there all the time the theater was in existance. It was the First Federated Church of Hyannis I think.

The above address will map accurately to the location of the drive-in, which is now occupied by a shopping center.

Here is a 1971 aerial photo of the drive-in, courtesy of HistoricAerials.com.

To expand on the church services. In 1954 the Rev. Dr. Carl F. Schultz, of the Federated Church of Hyannis began the services. Cars parked rears to the screen facing the projection booth. These services continued well into the 1980’s.

In later years those participating increased from a solist to a mini-choir. Singers, organist, and preacher climbed a ladder to the roof of the projection booth. In bad weather, a box truck was parked beside the booth, cargo door facing the screen. Again a ladder was used for those conducting the service to get into the box with door open.

I do not recall the concession ever being open during services.

On a personal note, I was very nervous on that ladder to the roof and truck!

Appeared in the 1986 movie one crazy summer