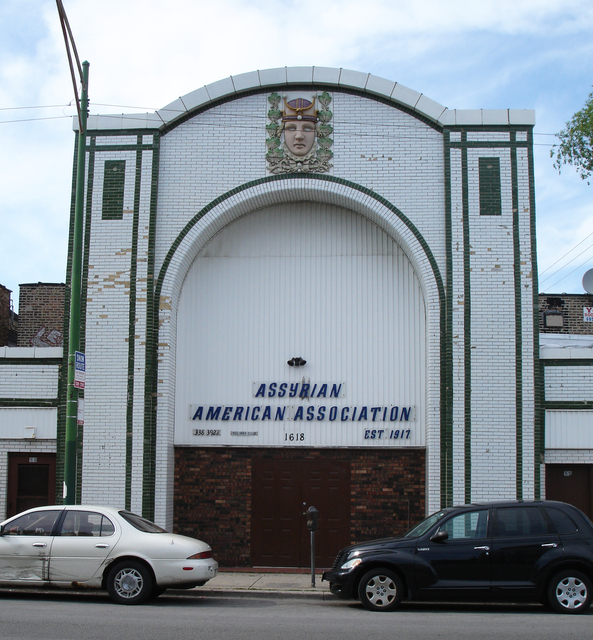 The New Devon Theater, with its distinctively austere glazed block facade featuring a large arch and a large bust of a woman’s face, was built in 1912, and was quickly eclipsed by the nearby Ellantee Theater. It disappears from news listings after October, 1917.

By 1923 it had been converted to a Ford dealership. By 1936 it had become an American Legion hall. In the 1950s it operated as a radio and TV store. Since 1963, it has served Chicago’s Assyrian community as the home of the Assyrian American Association of Chicago.

The late Don Klein, who managed a number of theatres in Chicago, once told me that this was the “original” Devon Theatre, and that the nearby Knickerbocker (6225 N. Broadway) was renamed the Devon when this theatre closed.

The Knickerbocker/Devon opened in 1916 and changed names in 1929 under Essaness.

The New Devon’s architect was Henry J. Ross. The “New” in the name referred to the former Devon Theater at 6417 N Devon which had been in operation from at least 1910. The Edgewater Historical Society claims that was in operation from 1905.

My comment on the Ellantee is probably not so correct as it did not open until 1919, although the site was earmarked for one as early as 1913.

Yes, I meant to say Broadway.

6417 N. Broadway doesn’t make any sense either. The numbers for Broadway stop at 6400 N.. North of this the street is part of Sheridan Road and is no longer called Broadway. There is a reference here to an older Devon at ‘1617 N. Clark’ which I think probably means 1617 W. Devon. If 6417 N. is meant and it is right in this vicinity it would have to be 6417 N. Ashland. South of Devon Ashland and Clark are one common street (called Clark). Right north of Devon there isn’t enough land for a building lot. Ashland is immediately east. This would be where Rogers Park Hardware is now.

The New Devon’s architect was Henry J. Ross. The “New” in the name probably distinguished it from the former Devon Theater at 6417 N Clark which had been in operation from at least 1910, and possibly as early as 1905, according to the Edgewater Historical Society. This was located approximately in the parking lot adjacent to the Ellantee/Ridge (hardware store), though its actual site was probably destroyed by street widening and re-routing Ashland.

The Ellantee/Ridge, which is now the hardware store, did not open until 1919, at which point the New Devon closed. The Ellantee/Ridge and was never called Devon and is not relevant to this discussion."

I have uploaded a news listing demonstrating that it was indeed the New Devon, as late as 1916, four years after it opened. There is no evidence at all to show that it was ever called the Devon Theater. Your “true history” is entirely speculative and only adds to the confusion.

Okay, thanks for the clarification Broan. I’ll go by your word then. I was definitely not trying to confuse anyone with that comment, or be speculative. I see I wasn’t totally correct, and I apologize.

The face above the entrance was recently removed.
The Assyrian American Association signage is gone as well.

Update on un-permitted work that led to destruction of the terra cotta and two stop work orders.