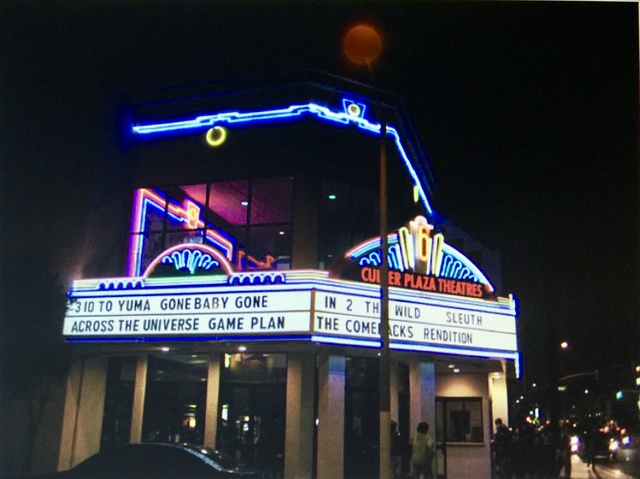 This multiplex is across the street from the Kirk Douglas Theatre (former Culver Theatre). It was opened February 15, 1991 and closed in December 2011. It was demolished in August 2012.

I hear the Culver Plaza is closing on Nov 27.

Wow! That’s a new update — it was through Sunday up until today. My guess is they’re just sticking around until Thursday… a reliable source told me it was closing this week to make way for condos.

Was told convincingly by staff last week that Sunday, November 27 would be the last day. Will ask again when I stop by this weekend to take some photos.

Their website culverplazatheatres.com does show the current movies playing through Thursday 12-1. Of course a website always can be in error, and the theater might well be closed Sunday night at close of business.

The reason I don’t think it is an error is because the site showed through the 27th up until yesterday. They clearly went in and changed it.

Theater has closed. Apparently demolition should be in a few days already.

Just rode by there. Demolition is about 1/3 to ½ completed. Amazing how quickly theaters burn out nowadays. I remember going there shortly after it opened. It wasn’t grand, but it was a decent cinema. By the early 00s it was already on it’s last legs as a first run theater. The last first run movie I think I saw there was 2004’s PHANTOM OF THE OPERA. I don’t think it was long afterwards that it became a 2nd run theater. Now, it’s totally gone.