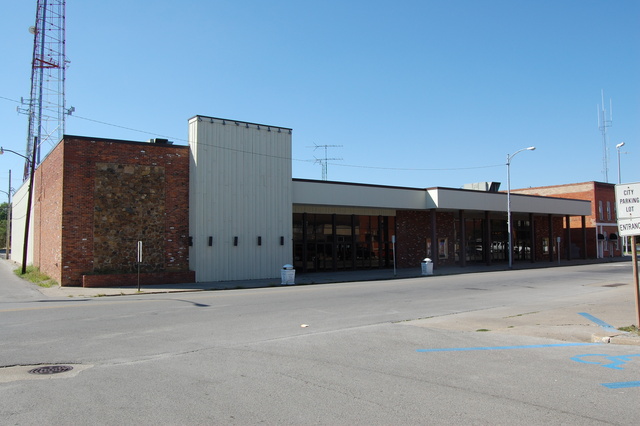 Operated by Kerasotes, and finally by AMC, the Cinema 4 was closed on November 28, 2010.

Looks to me Lost that it probably was 3 screens, and one of them was split to get four. Otherwise, why would you call it “Cine 3” when there are 4, unless their using “new” math, ha-ha.

This theater started out as a twin. Boxoffice of June 25, 1973, said that construction was about to begin on a twin theater for Turner-Reynolds Theatres (formerly Turner-Farrar Theatres) just off the town square in Harrisburg. Each auditorium was to have 309 seats. The August 6 issue of Boxoffice said that an October opening was planned for the twin on South Main Street. I haven’t found any items about the actual opening or giving the original name of the theater.

Looks like it’ll be closing – don’t know what other AMCs from Kerasotes will be on the chopping block but I assume many that don’t have online ticketing are in play – the complete list of acquired sites is at: www.amctheatres.com/welcome

The article on this one closing is buried on this page with a few more interestingly odd stories at: View link

View link
HARRISBURG — The AMC Harrisburg 4 has been a fixture on Main Street in downtown Harrisburg since 1971. Despite all that history, on Sunday the movie theater will close for good. Employees were notified by the AMC corporate office about a month ago.

AMC took over the theater in April. Twelve employees will be laid off. And although the company offered them the option to transfer to another theater, most aren’t taking them up on it. They say it’s just not worth the trip.

“The closest theater for me would be Marion or Benton. And for the same amount of pay, I just decided to look for another job,” said theater employee Garrett Smith.

With the Harrisburg theater closed, moviegoers will now have to drive about a half an hour to catch the latest release on the big screen. Many people were buying tickets Wednesday night, but employees told News 3 the week nights are typically pretty slow. Still— AMC told employees there was a long-term plan.

“In June they said that in five years if our profits have gone up we were going to get a brand new theater,” said Smith, “And if not, they were going to shut us down. And it kind of came as a shock, here it is six months later.”

The community is sad to see the theater shut its doors. Many said they were surprised by the announcement.

“I have a lot of memories here and it’s always fun to come here. You know, and bring your nephews and nieces and cousins and you just have so many memories. I can remember every movie I’ve ever seen here,” Doug Jones told us.

“I’m not real happy about it because this is the only place kids have locally to come and hang out with their friends,” said Ashton Lee.

The AMC corporate office wasn’t available for comment Wednesday on why its shutting down the theater.

The Harrisburg theater will cash in on the traditionally busy Thanksgiving weekend. Box office revenues hit an all time high in 2009 and they’re predicted to top that this year. So more people are going to the movies—but they won’t be doing it in Harrisburg anymore.

thanks Emily, nice write up.

When AMC sold the Cinema 4 to a local investment group, there was a stipulation that the building would never again be used as a movie theater, according to this article at the web site of NBC TV affiliate WPSD.

The former theater has since been converted into a gun shop and indoor firing range, so I guess it still sounds like movies are being shown in it.