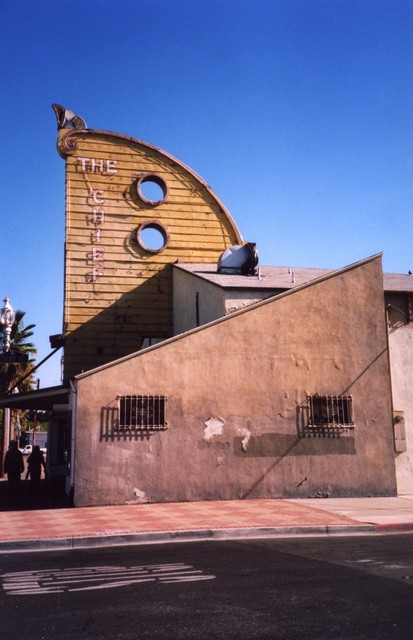 Located at the intersection of S. D Street & E. 3rd Street. The Perris Theatre was opened in 1946.

Funny you say that, when I was there I had that “I feel like I’ve been here before…” feeling. Likely because I had the Star hanging around in the back of my head.

This sounds hopeful. Seeing as the Chief is only one block from the newly restored depot, that would put it in prime position for restoration.

quote:
With a new Metrolink station and Riverside Transit Authority bus stop adjacent to the Depot, Perris officials say they are poised to meet the transportation needs of the region well into the 21st Century. The bus stop is expected to be open in the next two years and the Metrolink station by 2011.

â€œWe will be a hub,â€ said Perris Planning Commissioner Dave Stuart, who also served as the project manager for the restoration of the 1892 Depot.

Stuart said the Depotâ€™s restoration, along with revitalization of D Street and planned improvements along 4th Street will spur business development in the Cityâ€™s Downtown and will bring jobs and shoppers to Perris.

â€œIf you want to attract quality businesses, itâ€™s paramount that you keep and restore your historic buildings,â€ he said.

It maps correctly when you use S. D Street, as opposed to just D Street.

During at least one of the nearby Orange Empire Railway Museum’s “Rail Fairs” back in the early ‘90s, they reopened the Chief for that weekend’s festivities, showing old comedy short films dealing with trains or trolleys. Some of the Chief’s draperies were looking a little threadbare and there was some dust that the vacuums missed, but the seats were relatively comfy, albeit needing work. Looked pretty restorable.

If the last incarnation was the Chief, that should be the name, with Perris Theater as an aka.

The Metrolink station planning report identifies it as a “building of historic interest” under the original name of Perris Theater/Theatre (they spell it both ways), and says “The Perris Theater, which has rich design features and was built in the 1930s, is currently owned by the Perris Church of Christ.” It’s one of the few buildings they note and label on their map.

An article on a meeting to discuss the city’s Downtown Vision Plan mentions a suggestion to show classic movies, but it doesn’t sound like anything’s been decided yet.

Here’s a cool image of it, from before they removed the small marquee:
View link

Looks like a sister to the Maya theatre in Dinuba.

Scott’s link, plus our page for theMaya Theatre. They do look very nearly identical, and they both bear some resemblance to some other theaters designed in the 1940s by S. Charles Lee. There are two cards in the L.A. library’s California Index that cite items about Lee-designed projects in Dinuba and Perris.

The item about the project in Perris is from Southwest Builder & Contractor of September 21, 1945, and says that Lee was drawing plans for a $75,000 theater at Perris for Tom Sharpe. The Dinuba theater was a pre-war project noted in the October 1, 1940, issue of the same publication. It was a 600-seat house that Lee was designing for Leo L. Smith, and was to cost $35,000.

It looks as though Lee just recycled his 1940 Dinuba design for this 1945 house in Perris. I also see a resemblance to Lee’s somewhat larger and fancier 1940 Temple Theatre in Temple City, California. Like these two, the Temple had an auditorium with a gabled roof. I’d dearly love to see interiors of the Perris and the Maya, as the Temple had a king post truss roof which I thought was unique, but perhaps these two houses had them as well.

The City of Perris bought the Perris Theatre a few years ago and, according to this article from the April 9, 2011, issue of the Press-Enterprise, had already spent $75,000 on exterior renovations.

The article also reveals that this house was never called the Chief Theatre. That name had been placed on the building by the producers of a 1993 movie called Calendar Girl, which was partly shot in Perris.

It looks as if the Chief is the Perris again. It has gotten a new coat of paint and it now reads “Perris” where “Chief” was on the building.