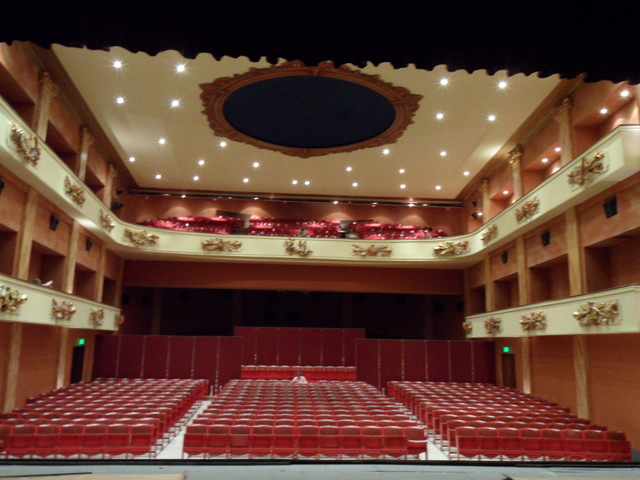 The Teatru Astra opened on 13th January 1968 and is owned by the Socjeta Filarmoniker La Stella which was founded way back in 1863.

The theatre is entered through a classical Greek styled portico which leads to an outer foyer containing a twin circular staircase leading to the balcony. Continuing through there is a large inner foyer which serves as a bar and meeting space. From here doors lead to a vomitory entrance to the rear stalls seating, above which there is a projection suite.

The auditorium is very handsome with two tiers of boxes along each side and a single balcony with a rather low ceiling above it. The hall is pristine having reopened in 2005 after a serious fire which occurred on the 8th November 2003. Many improvements were made to the theatre during the refurbishment, the capability of showing films was retained, although the viability of a 1,400 seat cinema in a city of around 5,000 makes film programming unlikely to be anything than one-off presentations âï¿½ï¿½ in the 1960 and early 1970âï¿½ï¿½s films were screened weekly at the Astra. There is a very large stage, but no flytower, together with a full range of rehearsal facilities, dressing / band rooms and an opera sized orchestra pit.

The main uses of the theatre now are for the band performances of the Filarmoniker and the annual opera season. The opera, like the Auroraâï¿½ï¿½s, is a real community event with local made costumes and scenery, professional principals, the Orchestra of the Teatru Manoel from Valletta, and local chorus and extras. There are also performances throughout the year from visiting companies / schools hiring the theatre and the Astras own Dramatic Company

Much has been made of the apparent rivalry of the La Stella and Leone societies, and whilst there will obviously be some competition between the two groups, I was certainly not aware of any ill-feeling from one to the other. In fact both organisations proved to be quite exceptionally welcoming and friendly on my visit.

Interior and Exterior photos of the Astra, Taken May 2008 here:–

Here is an October 2005 article that discusses renovation after the fire in 2003:
http://tinyurl.com/3ocujp