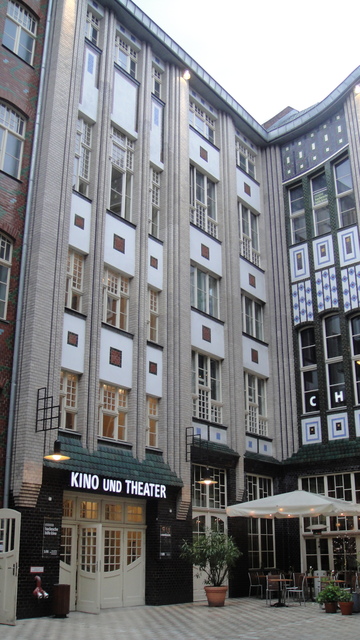 Located in the historic (and now renovated) Hackeschen Hoffen (A collection of buildings and very narrow alleys, which became a Jewish ghetto in the 1930’s). This particular building was originally built in 1906 as a banquet hall of a restaurant.

It was converted into the Imperial-Tonfilm-Theater in 1932 by architect Fredrich Zwiebel and seating was provided for 590 on a single floor. The building is down a very narrow alley and into a small courtyard, the actual auditorium is up-stairs on the first floor of the building.

It was re-named Fortuna Kino in 1935 and from 1937-1941 became the Imperial Theater Wieninger. The building, as did the whole area, survived the war-time bombing. It operated as the Imperial Lichtspiel Kino until closure came in 1961. The buildings and area by then were very run-down and basically a slum. Located in East Berlin, nothing was done to renovate them, and they just sat empty and decaying.

After the re-unification of Berlin, the area and the buildings in the Hackeschen Hoff were restored. It is now a ‘hip’ place to be and the new use for this building has become the very well patronised Chamaleon Variete Theater. It’s programme harks back to the ‘good old days’ of Berlin cabaret shows of the 1920’s, but with a modern approach.

How did you find that it was renovated by Fredrich Zwiebel?. I am interested on that data.

Hi Fred, Not sure, but could possibly have been in a book I have on Berlin kinos. Currently I am away from home, so can’t check.

Ken thanks, I asked you because I think it refers to my Grandfather Friedrich Zwiebel. I would love to have that information. He used to be a famouse electrical engineer devoted to the Film Industry in the 30´s. If you can share information with me once you are back home I will highly appreciate it. Very best, Fred

Hi Ken, did you have any chance to review the book?. Thanks in advance & Best Fred

Hi Fred, The book ‘Kinoarchitecktur In Berlin 1895-1995’ by Syvaine Hansel & Angelika Schmitt (Published in 1995 by Deitrich Reimer Verlag in Berlin). Listing for the Imperial-Tonfilm Theater on page 108:– ‘Ingenieurburo Friedrich Zwiebel (Umbau 1933/34)’ The index of architects at the back of the book only has this cinema as a reference to Friedrich Zwiebel.

Ken, thanks so much for the reference, yes it refers to my grandfather Friedrich who was specialized in the Cinema industry. I have a lot of pictures from Cinemas in Berlin that were brought by my grandfather and have been never released. If they are from your interest let me know. Best, Fred