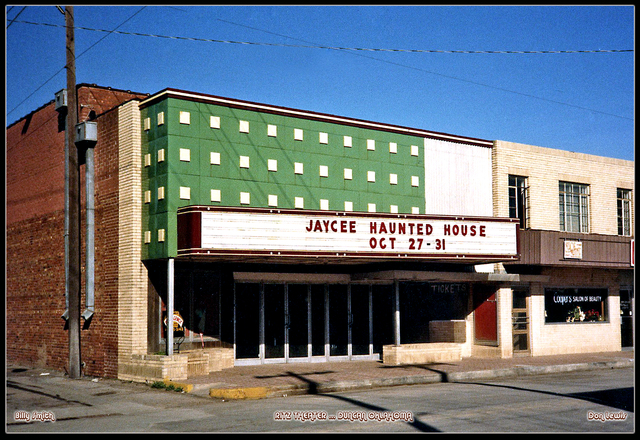 Replacing an earlier Ritz Theater which was located at 828 W. Main Street from 1928. The ‘new’ Ritz Theater opened in 1938 and was remodelled in 1952. It closed in 1963. Its vertical sign was removed several years afer that. As late as 1988 the red and tan brick building was still standing. Remaining was a large marquee that sheltered the entrance and outside ticket booth. Above the marquee was green sheet metal paneling that was probably covering up some nice brickwork. Sometime after 1988 the building was demolished.

Boxoffice Magazine’s issue of February 2, 1952, announced the opening of this theatre. The owner and manager of the Ritz was named as Jack Guest, and the article said that there were 500 seats on the main floor, and that there was also a small, segregated balcony.

It also described the theater’s unusual snack bar, which included counter seating, plus booth seating for fourteen patrons, and offered a short order menu including waffles, sandwiches, as well as soda fountain concoctions. There’s no mention of whether or not the snack bar was open to patrons seated in the balcony, but I think we can assume that it was not.