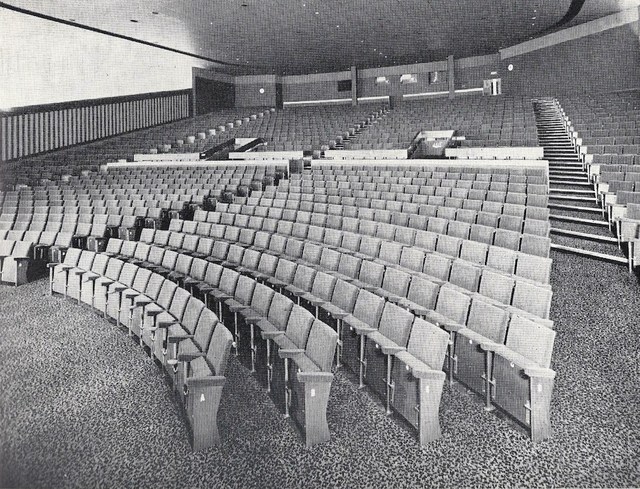 The ABC was built by Associated British Cinemas(ABC) as a replacement for their Picture House Cinema which had opened in 1914. It opened on 18th May 1967 with Omar Sharif in “Doctor Zhivago” presented in 70mm. It is situated in the middle of the town centre just 5 minutes walk away from Doncaster interchange. Designed with 1,277 seats arranged in a stadium plan by the architectural firm Morgan & Branch, with input by architects C. ‘Jack’ Foster & Alan Morgan. It was decorated in a modern 1960’s style.

The Cannon Group took control in the mid-1980’s and it was re-named Cannon and it closed on 18th June 1992, screening its opening film “Doctor Zhivago”.

The building has stood empty and unused since then, but in 2007, it was bought by Movie World for just Â£150,000. It is reputedly being re-modeled with extra screens added, however by 2009, only a clean-up of the interior has been achieved. The building sits empty and unused in 2018.

wow, remember the photo, ( posted by kenroe,)from an edition af abc film review magazine. many thanks for posting this.

it may be of interest. This year ( 2009 ) marks the 40th anniversary of the release of, “KES,” Kes was given it’s World Premiere at ABC Doncaster ( later cannon, ) It was quite an evening, one i shall never forget,

An amendment about KES. Although filmed in 1969, KES was only given private press screenings that year. The World Premiere was,on Wednesday March 25th 1970, at ABC DONCASTER, with cast, crew, film studio executives & the Mayors of both Doncaster & Barnsley attending, along with members of the public, who could buy tickets to the event.

Have load a view from the stage end. just before the grand opening

The area in which the Cinema is situated has now been bought by a property developer, no news as yet on any plans for the cinema though.

The property developer is St Modwen, although they have bought the Waterdale area including the cinema, there are as yet no details what they plan to do with it http://www.stmodwen.co.uk/uploads/documents/Waterdale%20Shopping%20Centre.pdf

If it’s the same developer (St. Modwen) that is also supposed to be redeveloping Farnborough (Hampshire) town centre then don’t expect anything to happen anytime soon.

I Recently contacted the developer (February 2018) that owns the ABC/Cannon, I asked them of their plans, I received no reply.

It seems less likely that the cinema will ever reopen, with the news today of a new cinema in the Cultural and Civic Quarter area of Waterdale http://www.doncaster.gov.uk/services/planning/new-cinema-complex

Another town centre cinema planned for Doncaster’s Frenchgate Shopping Mall, makes the re-opening of the ABC/Cannon even less likely. https://www.frenchgateshopping.co.uk/whats-on/news/new-cinema-approved-for-frenchgate