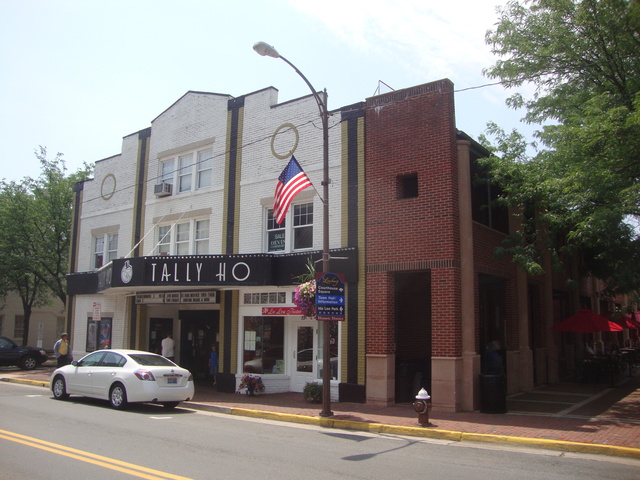 The Tally Ho Theatre was built in 1931 in Leesburg, VA. – in the heart of "hunt country". It was originally built as a single screen seating 500, and later split.

The theater was closed in 2000 when Regal Cinemas lost their lease.

After renovation, the theater reopened in May, 2002 as a twin movie house (the auditorium having been split down the middle) for mainstream and arthouse movies. In December, 2007 the theaters operators departed. In January, 2008, new operators took-over, planning new movies, cult classics, and improvisational comedy. The Tally Ho Theatre was closed in September 2012. It reopened in January 2013 as a performing arts center. The center dividing wall has been removed to create a single auditorium again. It presents music and live performances.

When the Tally-Ho Theatre was a single screen theatre it seated 739 people.

The Tally Ho closed in September 2012. It reopened January 2013 as a performing arts venue – no more movies, sadly.

The Fredericksburg Free Lance-Star reported on February 21, 1931, that Benjamin Pitts, operator of theaters at Fredericksburg, Front Royal, Warrenton, Culpeper, Killmarnock, and Suffolk, would build a new theater at Leesburg. The Tally-Ho Theatre later appeared on lists of houses operated by Pitts' Theatres as Pitts' Tally-Ho.

The Talky Ho no longer has movies. The center wall was removed, now a single auditorium that hosts music and comedy acts.

In the Overview it states being built “in the heart of "hunt country”.
One of the definitions of Tally Ho is: a huntsman’s cry to the hounds on sighting a fox.