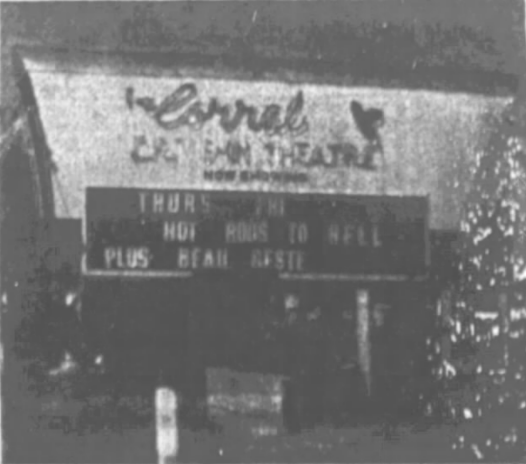 The Corral Drive-In opened in June 1949 and was located between Farmington and Park Hills. It originally had a single screen; a second screen was added in 1975. The marquee was a covered wagon, lit with neon lights and listings of the current movies being shown, usually a double feature.

It featured a concession stand, and there was a playground for the kids, right below the screen.

Approx. address for this drive-in was 4800 Flat River Road.

Quite a few years ago, someone built storage shed units on the property. They kept the original name, calling it “Corral Storage.”

“The St. Louis Theatre Supply Co. will provide all of the projection, sound, in-car speakers and other equipment for the 500-car drive-in being constructed on Highway 61 (sic) north of Farmington, Mo., by Edwards & Plumlee Theatres. Provision is being made to increase the capacity by 250 cars if and when business warrants.” —BoxOffice, Jan. 8, 1949

The Daily Journal of Flat River MO ran a long article on June 11, 1995, looking back at the Corral through the eyes of former manager Dave Jennings. Highlights:

The Corral opened with a single screen in June 1949, built by Edwards and Plumlee Theaters. Jennings said the name was chosen through a contest. He became manager “around 1963” and kept that position until the Corral closed in 1984 (sic).

[However, the Corral continued to advertise in the Daily Journal in 1985.]

Kerasotes Theatres bought the Corral in 1974 and added a second screen for the 1975 season. The lot contained more than 900 speakers. “Jennings said Kerasotes considered reopening the Corral last year (1994), but opted for the four-plex in Farmington.”

Weird! In the Edwards and Plumlee entry in the 1960 Motion Picture Almanac’s circuit list, it shows that the company owns both the Corral Drive-In in Farmington and the Belt Drive-In in Flat River.

An online PDF list of Southern Missouri theaters includes the Belt, “? 1961-? 1975 / Edwards and Plumlee Theatres owned this drive-in.” But a spot check of the Flat River Daily Journal’s Edwards and Plumlee ad from 1963 doesn’t show it. I’ll bet that online list got the info from the MPA, which got it cross-wired somewhere and took a long time to fix it. 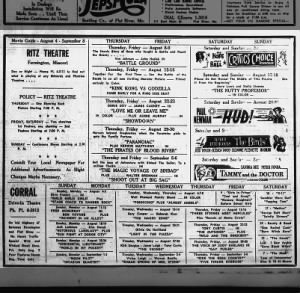