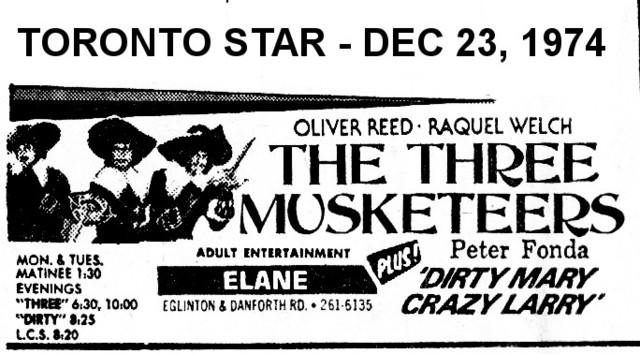 Located in the Elane Plaza on the northeast corner of Danforth Road and Eglinton Avenue, opened July 4, 1963.

The theatre was then just east (across the road) of the busy Sayvette’s grocery store and surrounded by highrise apartments. However, after Sayvettes closed and new multi-theatre cinemas opened the theatre struggled for business. The Sayvettes is currently a No Frills grocery store (as of July 2008).

The Elane Theatre closed circa 1985

After suffering to stay afloat, the entire Elane Plaza sold to a developer and demolished in 2006. A housing subdidision was built in its place.

I went to the Elane a number of times as a kid and I’ll miss it and that entire Elane Plaza, even though I got to see it in it’s ugly days towards the end.

Anybody else here have a membership to Bandito Video from the Elane Plaza? Ahhh, the days of expensive VHS tapes, but mostly renting original NES video games!

Sayvette wasn’t a grocery store, it was a dept store similar to a Towers or a K-mart. There was a large Sayvette near where I grew up in what is now Mississauga at Dixie Rd and QEW.

This theatre was a joint venture of Barry Allen (Premier Operating) and the original British Odeon Theatres of Canada. Other theatres in this partnership included the Odeon Parkway Drive-In and the Odeon Don Mills Theatre. At the same time Barry Allen was partners with Famous Players Canadian through Premier Operating and Theatre Holding Corporation.

As far as I know, since I came to this neighbourhood in 1999, there was a bridge connected to a plaza and No Frills.

I used to go as a kid in the early seventy’s, they would show old cartoons and have a draw before the movie started. That’s were I saw the first Star Wars movie. I believe this theatre is what gave my lifelong passion of going to the movies. Me and my two younger brothers used to go the barber shop in the Elane plaza, the barber shop has since moved to a location a little farther north on Danforth road still owned by Joe and whom I still get my hair cut.