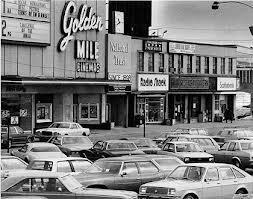 The Golden Mile Theatre opened its doors on October 14, 1954 at 6:45pm for it’s first features "Up In Arms" starring Danny Kaye and "Our Very Own" starring Anne Blythe & Farley Granger.

It was located near the east end of the Golden Mile Plaza, intersection of Eglinton Avenue E and Pharmacy Avenue.

When opened the theatre was advertised to have a modern refreshment bar, luxurious air-foam seats, scientific air conditioning, spacious lounges, smoking loges, CinemaScope and last but not least, hearing aids.

Originally one large theatre, it was renovated in 1978 to provide two theatres, to the plans of architect Mandel Sprachman.

The Golden Mile Theatre was one of the last businesses operating in the plaza before it was redeveloped.

The Golden Mile Plaza, an entire block of businesses (the retail showpiece of Scarborough when it opened in 1953) was demolished and replaced with a Loblaws Supercentre development in the early-1990’s.

The SuperCentre building remains as of this posting, July 2008.

An article about the Golden Mile Theatre appeared in Boxoffice of August 6, 1955. There are several photos. The article failed to give the name of the architect.

Photos of the Golden Mile after its coversion to a twin appeared in Boxoffice of September 18, 1978. The architect for the conversion was Mandel Sprachman.

I am currently doing a research paper on the history of this theatre. Unfortunately the links you posted are no longer working, and I can’t seem to find this information myself. Could you possibly point me in the right direction?

Just out of curiosity, did you ever visit the Golden Mile?

Thanks for your help, Jen

Very belated linkrot repair: The August 6, 1955, Boxoffice article about the Golden Mile Theatre can now be seen at this link.

I’ve been unable to find the 1978 article about the conversion to a twin, as Boxoffice has moved its archive to a user-hostile web site that is nearly impossible to search from either inside or outside.

The theatre was eventually replaced and succeeded by a new Cineplex Odeon Eglinton Town Centre Cinemas in 2000 built partially on the former GM plant.