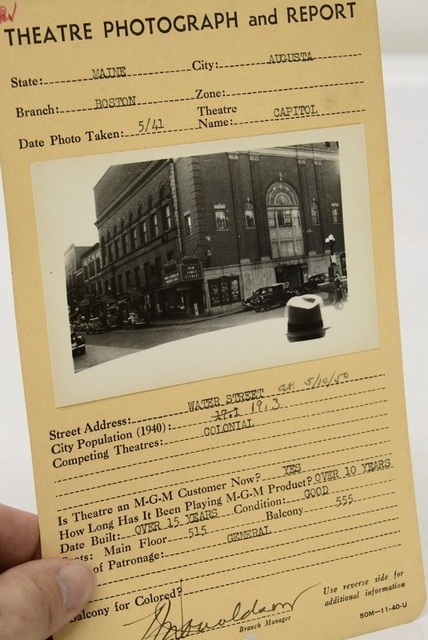 The building was constructed in 1865. In 1930 it was converted into the Capitol Theatre. It closed as a movie theatre in August 1954. It sat unused until 1964 when it reopened as a live theatre by the Augusta Players. It was closed in 1974. It was demolished in 1983 following a fire.

In the 1942-43 Motion Picture Almanac, the Capitol in Augusta is listed as part of Maine & New Hampshire Theatres Co. of Boston.

Ron and Bryan the Capitol is Still listed in the 1956 Almanac with the same theatre Company.

I checked on google maps the entire length of water street and the only building that resembled a theater is at approx. 174 Water St. Front looks like it could easily have been a very early theatre building circa 1920, no modernizations, all brick. Side is solid brick and a taller stagehouse area in back. It looks like it has been abandoned for decades, all the small windows in the front are broken out. If this is it, then it was never converted into anything else. Just three sets of double doors in front, marquee long gone. Must be a wreck inside.

The Capitol is long gone. It was situated in a building built in 1865 at the corner of Water Street and Market Square (near Winthrop Street.) It was converted into the Capitol Theatre in 1930. The building was demolished in 1983 after a major fire, the third in the building’s history.

The building is landmark #18 on this web page. There’s a small photo from the pre-Capitol period.

In its issue of August 24, 1964, Boxoffice reported that workers were busy renovating the Capitol Theatre in Augusta, Maine, in preparation for its reopening. The Capitol had closed its doors in August, 1954. I’ve been unable to find any followup articles saying that the house did in fact reopen for movies after a decade of darkness, but the house was definitely used for live performances by the Augusta Players, a local community theater group who performed on its stage from 1964 to 1974.