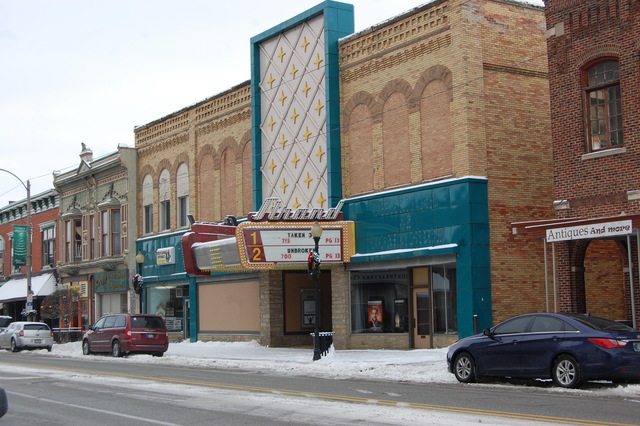 The ornately decorated opera house could seat around 750 in its auditorium on the ground floor and balcony. It hosted opera, legitimate theater and minstrel shows.

By the turn of the century, it was sold to Al Boyer, who renamed the Opera House for himself. In addition to the programming of the previous ownership, it also featured vaudeville acts.

The Boyer Opera House was closed during WWI, but was reopened in 1919 and refashioned as a movie theater.

Briefly run by the Deardorf family during the 1920’s, it was sold to the Hudson family in 1929, who had it renamed the Strand Theater.

The Hudsons at the time also owned two other Kendallsville movie houses – the Colonial Theater and the Princess Theater – both long since vanished.

In the 1930’s and 1940’s, the owners increased seating to 953, and added a new screen and modern sound system. Also, it began to offer serials and double features on Saturdays.

In 1952, a 33-foot tall CinemaScope screen and stereophonic sound equipment were installed. It was also around this time that candy and popcorn were sold for the first time at the Strand Theater. To woo audiences away from their tv sets in the late-1950’s and first half of the 1960’s, the Strand Theater began to feature long runs of Hollywood epics like "Cleopatra", "Bridge on the River Kwai" and "Lawrence of Arabia". The 1959 showing of "Ben Hur" remains the all-time highest attended movie at the Strand Theater.

In 1980, the Hudsons twinned the Strand Theater, with about 400 seats in each auditorium. They also increased the lobby and office space and the outside ticket booth was removed.

The Strand’s fantastic 1960’s-era "Space Age" style marquee, somewhat altered when the theater became a twin, remains the highlight of its exterior.

Despite ever-increasing competition from nearby multiplexes, the Strand Theater remains an integral and popular part of downtown Kendallville.

The Strand Theater of Kendalville, Indiana is owned and is being renovated by Bruce Babbit. He is also the owner and renovator of a great 1920’s theater house in Garrett, Indiana, and the Drive-in theater in Garrett, Indiana. You should really do an article on him and his restoration projects.

Here is an interesting biography of the longtime theater manager:
http://tinyurl.com/zv6k5

Here is an article about the Strand and some bygone theaters in Kendallville:
http://tinyurl.com/oayr8

As the “Spence (probably a typo) Opera House”, this theater is listed under Kendallville in the 1897-98 edition of the Julius Cahn Official Theatrical Guide. A.M. Boyer was the Mgr., the seating was 800, and the house had both gas and electric illumination. The proscenium opening was 30 feet wide X 40 feet high, and the stage was 38 feet deep. There were 5 members of the house orchestra. Local newspapers were the Sun, News and Standard. Hotels for show folk were the Reyher and the Kelly House. The 1897 population of Kendallville was 4,000.

A major remodeling of the Strand Theatre was carried out in 1951, according to Kendallville Heritage Association’s Historic Places tour (PDF file here.) The remodeling was designed by the A.M. Strauss architectural firm of Fort Wayne (Alvin M. Strauss, a Kendallville native.)