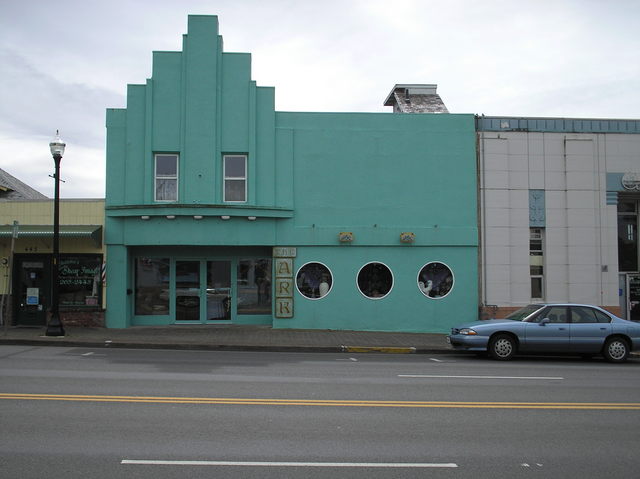 The 325-seat Midway Theatre was opened by 1926. By 1931 it was listed with 300-seats. By 1939 it was listed with 400-seats. This single-screen theater closed in 1992 but was restored from 1996 to 1998, when it reopened as a mixed-use venue for retail, an art gallery, wine tastings, live theater and concerts called the Ark Historical Theatre and Art Gallery. It is currently for sale.

Update on the Midway Theater:
This theater was awaiting the wrecking ball when we purchased it in l996. After two years of restoration and renovation it was opened again in 1998. This historical venue is now known as the “Jewel of the Oregon Coast”. The art deco architectural integrity of the building has been maintained. The use of the building has been expanded to include a retail antique store (showing silent movies), art gallery, wine tasting, concerts, live stage theater, and wine tasting. The name of the building has been changed to The Ark. Sadly, we are in the process of selling this awsome building. If you are interested please go to the internet site “LoopNet” and look up the listing for “The Ark Historical Theatre and Art Gallery”.

Ou of curiousity, how many seats does it hold?

I saw and photographed the exterior of this cute, turquoise-hued deco ziggurat-facaded theatre last week. It is still called The Ark, and appears to still be functioning. I could see into the homey lobby, likewise painted turquoise, and see that clearly, the building is occupied by people for whom aesthetics and charm matter. Here’s hoping it continues.

There is contradictory information about this house on the Internet. According to a list at Oregon Historic Theatres, the Midway opened in 1930 and has also been known as the Ark Theatre. However, this post at Waymraking calls it the Arc Theatre, and says that it opened as the Midway in 1936. This post also gives the aka Ark, saying “[t]his single-screen theater closed in 1992 but was restored from 1996 to 1998, when it reopened as a mixed-use venue for retail, an art gallery, wine tastings, live theater and concerts called the Ark Historical Theatre and Art Gallery.”

As the facade is a bit advanced for 1930, I’m inclined to go with the 1936 opening date for the Midway, although it’s possible the house opened in 1930 and was remodeled in 1936. And as for the variant spellings of the aka, the building is currently the home of the non-denominational Ark Bible Church, which the Internet tells me was established in 1997, so Ark was probably the spelling of the aka from the beginning. That’s the spelling that’s currently displayed on the building.