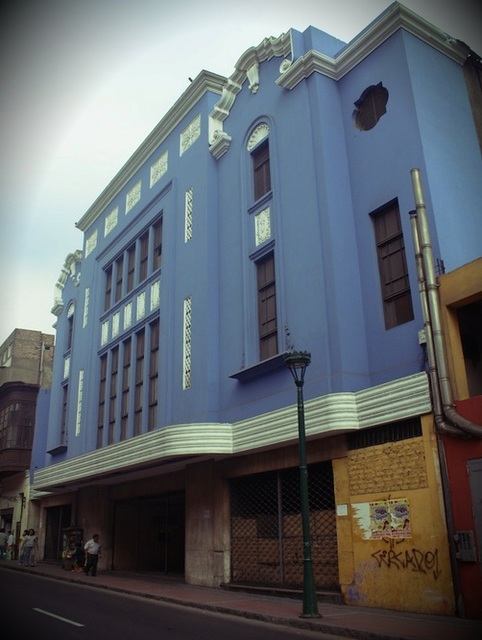 The Teatro Central was built for and intitially operated by Juan Calvo & Amedeo Calvo. It opened in May 1942 and was equipped for stage shows and cinema use. As the name implies, it is located in the downtown centre of Lima.

Designed by noted architect Giullermo Payet, the facade is in a Neo-Colonial style (plans for an Art Moderne style facade were never carried out). It has a central section with windows and decorative features above and on each side is a side-bay, with moulded features and a tall narrow window with an arched top.

Inside the auditorium seating is provided for 420 in the centre of the orchestra, with 582 seats on the side orchestra seating areas. The single balcony contains 923 seats. The main features of the auditorium are the three magnificent murals located on the side-walls each side of the proscenium opening. Depicting civilisations of the world, there is a panel for each of the following; Egyptian, Roman, Mayan, Indian, Greek and Persian. The panels have a gold/metal finish and are in a stylised Art Deco form. They extend from just above head height, up to the ceiling, which consists of a series of stepped sections that contain troughs of concealed lighting. There is a rectangular proscenium and a decent size stage and stage house with dressing rooms.

Shortly after opening, the Teatro Central was taken over by Warner Bros. as their showcase cinema in Lima.