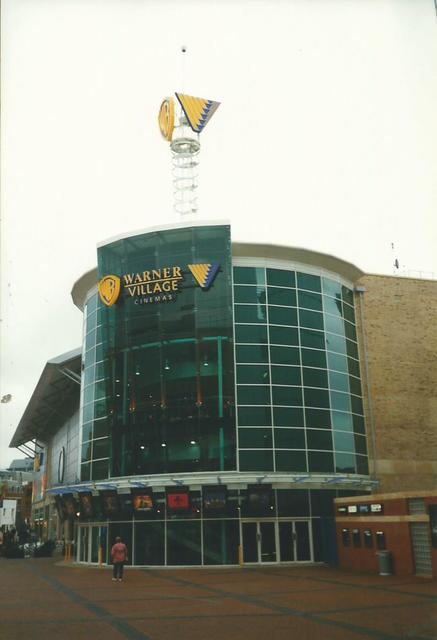 The 10-screen Warner Village opened on 24th November 1999. Before the cinema opened, Reading Corporation Tramways Power Station stood on the site. The Tramways Power Station was built in 1903 by R.W. Blackwell & Co. The building was topped with 2 white stone plaques. The only artefact of the site’s former use in one remaining plaque, which is visible on the rear of the cinema.

Located in the Oracle Shopping Centre, beside the River Kennet, the cinema has a ‘walk of fame’ with hand prints in blocks of cement, similar to Grauman’s Chinese Theatre, Hollywood, California. TV personalities Dale Winton and Anthea Turner opened the cinema and were first to have their hand prints immortalised. Later additions to the ‘walk of fame’ have included Sir Richard Attenborough, Joan Collins, Denzel Washington and Julie Waters. The cinema has a 24-hour operating licence. In February 2004, it was re-branded Vue.

Seating capacities in the screens range from 384, down to 84.

Judging by the June 2006 photograph of the cinema as the Vue, it appears that the imaginative cinema/film-styled statue, that I photographed in January 2000, and which stood outside the cinema, has been moved. I do hope it is still on display somewhere close by.