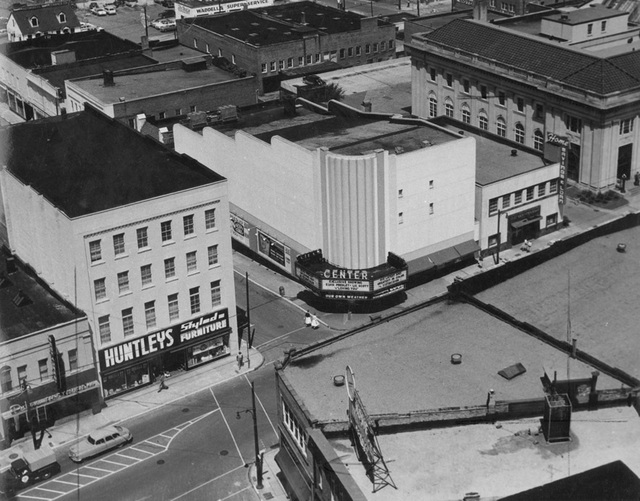 Located in downtown Durham on E. Chapel Hill Street, the theatre was operational from December 16, 1938 when it opened with Lewis Stone in “Out West with the Hardy’s. It was closed in August 1966. The theatre relocated in 1966 to the suburbs of Durham at Lakewood Shopping Center where it moved to in mid-November 1966. The Center Theatre showcased first-run features and was also a single screen theatre.

The Center Theatre was demolished in early-1967, to make way for Mutual Savings and Loan Association building.

The Eastern North Carolina Premiere of “MY FAIR LADY” was a Reserved Seat Engagement that opened at Durham’s Center Theatre on January 14,1966. At the time this movie opened,it was one of two theatres in the state of North Carolina that played it(the other at Charlotte’s Capri Theatre,that opened on January 28,1965)…….other theatres within the state would not get the film until June of 1966 or August of 1966,even though it was originally released in 1964.

“A pipe organ with thirteen sets of pipes is a special presentation feature at the new Center. The instrument is spotted from overhead during performances and crosslighted when house illumination is on from special spots located above the exit sights.”

Anyone know anything about the organ or what happened to it?

Bob, it may have been donated to Davidson College. As a child in the early to mid 1960s, I was awed by the console, but I never heard anyone play it.

Art moderne at its finest. Really handsome building. To bad it is just history. That city’s loss.

CORRECTION! The Center’s organ went to Campbell College, and then to a private owner in Burlington, NC. See: http://theatreorgans.com/piedmont/history.htm

CORRECTION: This theatre was operational from 1939-1966. It closed in August of 1966 when it moved to the new state of the art movie theater at Lakewood Shopping Center that opened in mid-November of 1966.

CORRECTION; “My Fair Lady”, “The Ten Commandments” and “Doctor Zhivago” played at this theatre. “My Fair Lady” was the Center’s reserved seat engagement.

“The Sound of Music” however played at the new theatre which was called THE LAKEWOOD CENTER THEATRE in early-1967. It did not played at the Center Downtown since it was already closed by 1966.