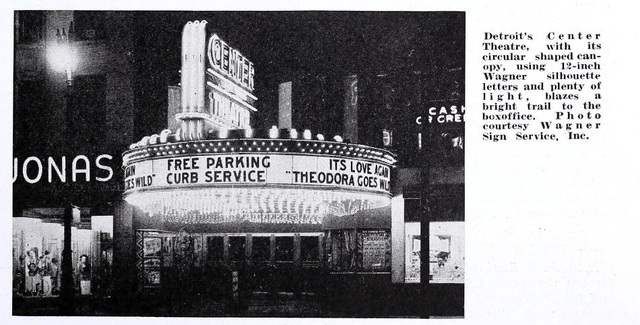 Opened in 1932 as the Trans-Lux Theatre, this branch of the popular newsreel circuit seated a little over 340. It was designed by Thomas W. Lamb – his only work in the city of Detroit.

The Trans-Lux Theatre had a feature which was advertised as "daylight projection" (actually rear projection), so that theatre-goers were able to move around the smallish auditorium without it being overly darkened.

In 1934, the "daylight projection" system was taken out in favor of a standard projection booth. Seating was also increased to 700 and it was renamed the Center Theatre.

Growing interest in television spelled the end of the Center Theatre, and it was shuttered some time in the 1960’s.

The former theatre was later converted for retail use, and today houses a thrift shop.

The Center was open in the 60’s because I distinctly remember it as being one of the few theatres open for a certain movie that I wanted to see. It is not in existance now, but it was most definately open in the 60’s.

The Center theatre listed above at 6540 Woodward was located South of the Boulevard (west-east grand blvd), and was converted to retail space in the late 40’s. The Regent theatre @ 7314 Woodward was renamed the “Center” in 1961, and retained that name until it was demolished in 1975. The two theatres were only a few blocks apart, and both were named “center” as they were located in what is still called the new center area of Detroit.

Building is for sale on loopnet:
http://tinyurl.com/clsbl5

That’s an old picture as well.

September 2019 street view shows boarded up front with part of the upper facade removed on the right.