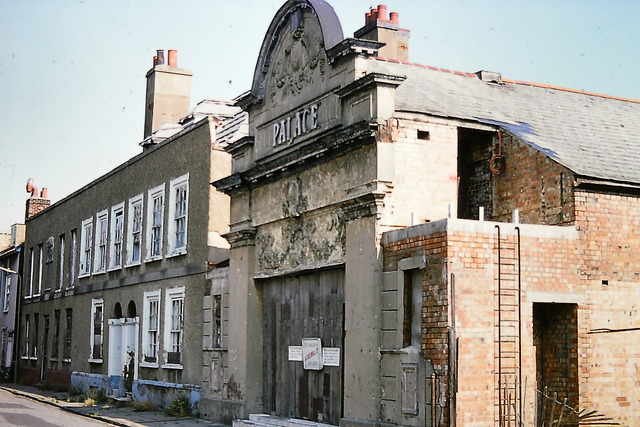 One of the oldest operating cinemas in the United Kingdom, the Electric Palace opened on 29th November 1911 with a seating capacity of 380, all on a single floor. The paybox is centrally located in the entrance on the street and is flanked by doors which lead straight into the auditorium, there is no foyer. Originally, there was a seperate entrance located down an alley at the side of the building for the cheap seats in the front stalls. There was a stage and dressing rooms.

It was re-named Palace Cinema in 1913, but by the mid-1930’s had reverted back to the name Electric Palace Cinema. It closed in 1956, after television nearly killed off this venerable picture palace. It then sat empty, unused and virtually forgotten.

The Electric Palace was nearly demolished in 1975, but was spared and volunteers reopened it in 1981.

It is open thanks to the generosity of public and private funds and its dedicated group of volunteers. Performances are held on Friday evenings, and matinee & evenings on Saturday and Sunday. In 2019 it was closed for a complete renovation and removal of asbestos. It reopened on 8th April 2022.

The Electric Palace Cinema is a Grade II* Listed building.

It’s the oldest cinema in the world with most of the original fittings and fixtures remaining(according to the Guinnes Book of Records)!

Beautiful Building>>>>please keep this from destruction>>>>

In April 2018 the Electric Palace was awarded £653,000 from the Heritage Lottery for extensive refurbishment work, especially with regard to the ceiling plaster work (which followed incidents in London and Ipswich where plaster had fallen from the ceiling). The cinema has also not been fully redecorated since it was first restored in the 1970s; the seats and toilets will be refurbished, some electrical equipment will be replaced and the stage will be enlarged. The work will be carried out by Ipswich-based firm Nicholas Jacobs Architects.

The cinema will be closed for several months. The closure date has been put back a few times (as of writing, it is set for August). Anticipating a slightly earlier closure, the Trust had the inspired idea of recreating a ‘cinema-in-a-tent’ Bioscope on Harwich Green for the Harwich Festival, which ran from Thursday 21st June to Sunday 1st July.

This was based on the type of Bioscope presented by Charles Thurston, the travelling showman who built the Electric Palace.

His first travelling cinema, the Original Royal Show, first appeared at Norwich Easter Fair in 1901. It had a Gavioli fairground organ and was soon renamed Thurston’s Royal Show. It visited Harwich and many towns in East Anglia. In 1908 he launched an even bigger attraction, “The Great Show”, which featured the Bioscope showing ‘Living Pictures’ and vaudeville acts. It, too, had an organ and a very elaborately decorated ‘front’. Very soon afterwards, of course, safety regulations led to the rise of the purpose-built cinemas, and the fairground bioscopes closed down. [Thanks to Ken Roe for this information.]

The programme of events at the ‘Bioscope on Harwich Green’ included a demonstration of the Edwardian Bioscope by David Cleveland and Nigel Lister, local films and a variety of classic and recent feature films. I attended on the final day, when Eisenstein’s “Battleship Potemkin” was shown, with live piano accompaniment by Chris Jarrett. The show was introduced by Trustee Chris Strachan and the mayor, Charlie Powell, made this a Gala screening. He spoke passionately about the Electric Palace.

The ornate frontage to the Bioscope was the work of carpenter Adam Threadgall and his team, with design and painting by sign writer and artist Bryan Rowland. See ‘Photos’ for the results!

Further to my Comment dated 2 July 2018, after a delayed start to the work asbestos was discovered in the roof space, leading to all work being halted whilst additional funds were sought in order to employ a firm of asbestos analysts as well as one to actually do the removal.

Because the roof space was full of fibre-glass insulation material this was deemed to be contaminated and it all had to be removed as if it was asbestos. Fortunately, Historic England awarded a grant of £300,000 and the National Lottery Heritage Fund increased their grant specifically to cover the additional costs of removing the asbestos, enabling the work to proceed.

In order to facilitate access to the ceiling, the entire roof had to be removed, with the building being protected by sheeting supported by scaffolding. In October 2019 I was invited by Chris Strachan to join a site visit to take a unique view of the ceiling from above. See the series of photos dated 4th October 2019.