The Fox Northwest Plaza Theater opened by National General Theatres on December 22, 1967 with Audrey Hepburn in “Wait Until Dark”.

National Amusements purchased the theater in 1988 and eventually closed it in September 1998 for good.

This theatre has the same design as the Valley Circle theatre in San Diego.

The comment from Terrybear was incorrect about CABARET playing at the Northwest Plaza. Allied Artists made a circuit wide deal with National General after it had secured a date with the McCook Theatre. The owners of the McCook sued and the date was restored to the McCook.

rivest266 is right. The Cinema North bears a striking resemblance to the Valley Circle Theatre in San Diego, California. It looks as though National General used the same plans, by Beverly Hills architect Harold Levitt, for both theaters. I recall seeing a photo of another almost identical theater (somewhere in Missouri, I think) but I can’t recall the name of it.

I remember now that the other theater of this design was the Mark Twain Theatre in Sunset Hills, Missouri. Boxoffice attributes that design to Harold W. Levitt, Ernest W. LeDuc, and William H. Farwell, all of Los Angeles. LeDuc and Farwell were members of the firm of Harold W. Levitt & Associates.

Joe. Also another of the same design in Kettering. 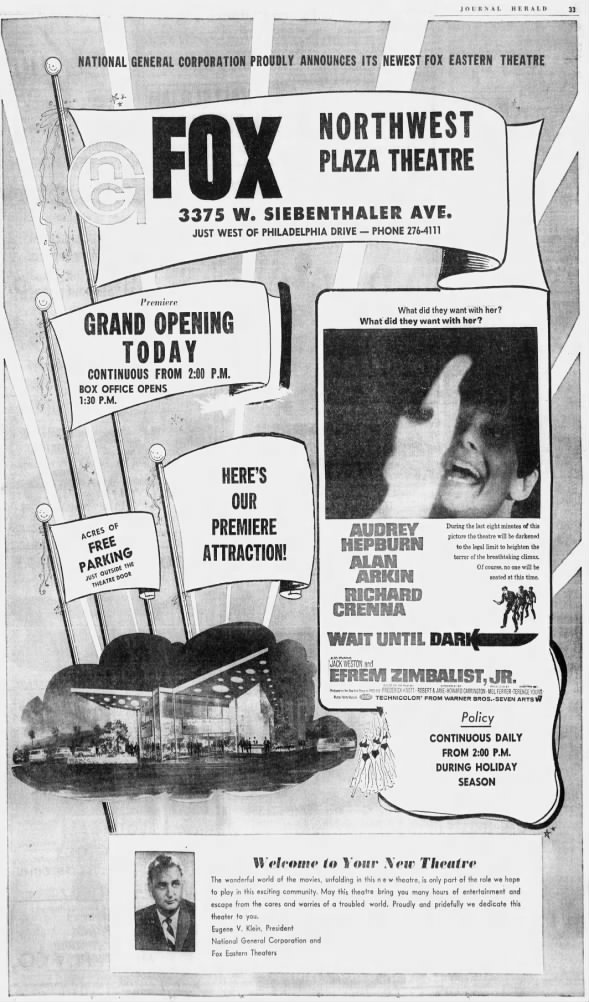 Thanks, Mike. I’ll note that in a comment on the Kettering Cinemas page.

Sold to Chakeres on July 22nd, 1977 and reopened as Cinema North with two screens on October 7th, 1977. Another ad in the photo section.

Worked a midnight showing of “Night of the Living Dead” on a Friday night back in 1980. Possibly one of the strangest and most dangerous crowds I’ve ever experienced in a movie theatre.