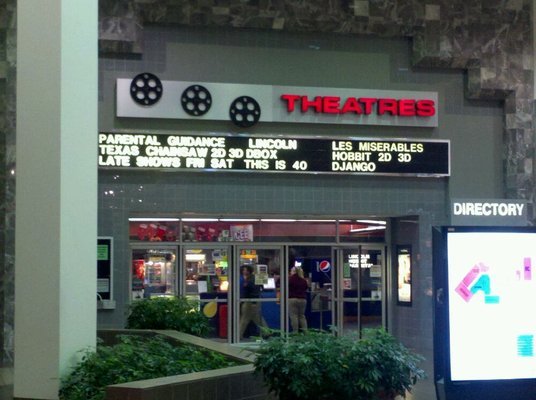 A basic mall-based theater that was opened in 1988 previously part of the Loews Cineplex (and then AMC) circuit. Prices are a bit lower than in some of the other larger malls in the area.

This was originally a Loews house. Does anyone know if this is still open? No showtimes listed on any of the online services and AMC doesn’t have it as a location.

It is still open and showing first-run films, but appears to be no longer part of the AMC chain. I have updated the page to reflect the recent changes …

It would be interesting to see how this is running. Independent?
I believe that Regal could not take it over due to anti-trust laws.

I just visited the Theater today in rotterdam, to see Alice in Wonderland in Disney Digital 3D the seating was all new, and the theater was in good condition, but that wasn’t my problem. I saw the Movie today at the 8:15pm showing on a Friday night. Now get this, what kind of movie theater that has a line out the door of nearly 100 people only has one ticket booth open at the concession stand when there is 6 people working? seriously! But thats not were this story ends, they have one concession line open and 4 other people just standing around doing nothing. Anyways the movie starts 5mins late (not a big deal, I used to work at Regal Cinemas18 at Crossgates Mall we had an occasional problem) but during the whole movie a person was recording the while movie, our wearing your 3d glasses and all you see is this blaring LCD screen. It was so distracting, I finally got up and reported it to an employee, she didn’t seem to care, and didn’t seem todo anything. After another 30mins went by I could no longer stand it, I found he manger and told them about this issue she said she would take care of it, all she did was send an employee in 10mins later with a flashlight. incident was never stooped, and someone was able to record the whole Movie totally ignoring FBI laws and fines upto $500,000. Possibly my worst theater experience ever, I wont be visiting there anymore.

It appears this is now part of the Zurich chain: http://www.zurichcinemas.com/

It’s a small (5 locations) operation. It also looks like the theatre has been refitted with stadium seating, digital and 3D.

Zurich is is Rome, Oswego and Geneva NY as well as Mansfield Center, CT. Pretty sad website; doesn’t appear to be much of a marketing effort behind a company that would spend so much to refit a 15 year old operation.