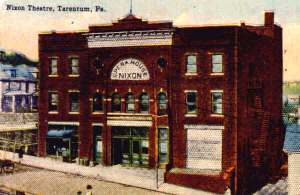 The Teraco Opera House was built to serve as a legitimate theater in January 1906. In 1907 it was renamed Nixon Theatre. Later on it was renamed the Harris Theater and showed movies. It closed in the late-1950’s.

A history of Tarentum published as part of the Tarentum Borough Comprehensive Plan (Google Documents quick view here; see page 23) says that the Harris Theatre opened in January, 1906, as the Tareco Opera House, and was renamed the Nixon Theatre the following year. It became the Harris Theatre in 1926.

The Nixon was mentioned in the September 16, 1916, issue of The Moving Picture World, which reported that the vaudeville house had been taken over by F.J. Nally and Jacob York, who intended to operate it as a movie house.

I remember this theater in the early 1950s—named the Harris Theater at the time. It was a grand place where I spent many a happy hour—marquis, ticket box, large stage with red velvet stage curtain, magnificent high ceiling with ornate lighting and decorations. Truly, a classic movie palace. There may have been an organ—perhaps an orchestra pit.

As I grew up, the theater sadly fell into disuse—its glory days were over—but much, much too prematurely I thought. The downfall started a mere 50 years after this grand Opera House opened! Oh the short-sighted community that let this gem fade away—and eventually be demolished.

The theater had a balcony. And there was, as I recall, a bowling alley and pool hall on the basement level. I would love to hear from anyone who knows more about this theater.