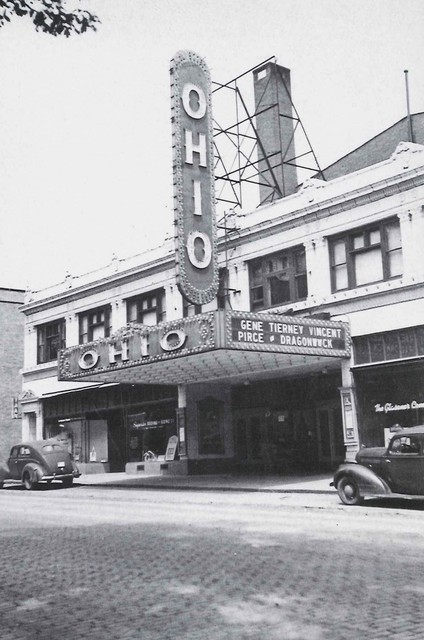 The Ohio Theatre was built in 1927. It had seating for 1,783 and was equipped with a Kimball 3 manual 10 ranks theatre organ which was opened by organist Edward Benedict.

In the 1920¹s, Hollywood was booming. Movies were immensely popular, so the big motion picture companies were building magnificent theatres everywhere.

With a population of about 30,000 in 1927, Mansfield, Ohio, located in the heart of north central Ohio, seemed an ideal spot for a majestic movie house. The Warner Bros. Circuit Management Corp. spent $500,000 to build the Ohio Theatre.

Despite near blizzard-like conditions, the Mansfield News reported that thousands thronged to the theatre for the initial performance on January 19, 1928 with Clara Bow in “Get Your Man”.

First-nighters marvelled at the beauty of the new Ohio Theatre and it continues to delight audiences today. The Renaissance Theatre was last renovated in 1984. On its 88th birthday (January 19, 2016) completion of the restoration of plaster work and paintings which had been damaged by a leaky roof. The beautiful and historic Renaissance Theatre is the only large theatre in North Central Ohio and is the premier venue for a wide range of outstanding entertainment, including comedy, country, gospel, family entertainment, theatre organ concerts, The Miss Ohio Scholership Pageant, and much more.

It’s shame that the other theatre in Mansfield, the Madison Theatre hasn’t been restored as it certainly deserves to be since it is a John Eberson/art deco theatre of the 20’s!

The Madison Theatre is now a park which is information I rec’d via an email from the Mayor of Mansfield Ohio.

I note both Mansfield indoor theaters on Park Avenue West. There are newspaper articles from 1938 describing the opening of the Park Theater on South Park and Diamond Streets. This is most likely a separate theater, absent any information to the contrary.

A 1996 view of the Renaissance Theatre in Mansfield.

The Cleveland Landmarks Commission’s list of buildings designed by architect Nicola Petti includes an unnamed theater on Park Avenue in Mansfield. The project was designed in 1927, but the list notes that it has been demolished.

As this is the only theater on Park Avenue that is listed at Cinema Treasures, and I’ve found no evidence that there was ever another theater on that street, perhaps the Landmarks Commission was mistaken about the Petti-designed theater having been demolished and it was indeed this house.

CinemaTour does attribute the design of the Renaissance Theatre to Petti, but doesn’t cite a source. The building is listed on the NRHP, but the Register’s web site says that the document with the theater’s information has not yet been digitized.

Joe, yes they are referring to the Renaissance. (Originally the Ohio Theatre.) It was designed by Nicola Petti and opened in 1928 in the “Grand Baroque” style. Not sure why they said it was demolished. Perhaps because of the name change in the 1980s? It’s still very much open and the centerpiece of downtown Mansfield. They built an amazing addition onto it in 2009 with a larger lobby, restrooms, offices and elevators. The other two theatres on Park Avenue were the Madison (built in 1930 in the Art Deco style and demolished in the early 80s after a valiant attempt to save it) and the Park, (built in 1938 also in the Deco-ish style and closed in the 60s.)

The Renaissance/Ohio Theatre in Mansfield has a Wurlitzer “Special” model theatre pipe organ of 3 manuals, Opus 997, which was originally installed in the Warner Brothers Studio in Los Angeles, CA (ship date January 30, 1929). It apparently passed through the hands of many owners before arriving here, and is reportedly “OK”. Anyone with more current info on the organ is invited to post here (although I do like that “theatre organ concerts” are mentioned amongst the activities at the theatre at the top of this page, suggesting that it’s still in use).

According to the same website’s list of Original Organ Installations, the Ohio Theatre originally had a Kimball theatre pipe organ of 3 manuals and 9 ranks, opus KPO7029, installed in 1928.

Does this latter organ still exist, and where is it (or its parts) today? Thanks!

A reasonably accurate history of the Ohio/Renaissance Theatre can be found here: http://www.mansfieldtickets.com/content/view/67

The 1928 Kimball in the Ohio was apparently sold to a girls' school in Michigan, then scrapped. Although David Junchen and others list the organ as a “3/9”, notes I took in 1957 show 12 eight-foot stops on the Great. Two of these were probably synthetic, so there is a possibility the organ actually had ten ranks of pipes. If anyone has the complete stoplist/specifications of the Kimball, I would like to compare notes.

Two more Kimball organs listed for Mansfield are a 1916 two-manual “with two-rank Echo” for the Grand Theatre, and a 1923 two-manual for the Majestic Theatre. Source: Encylopedia of the American Theatre Organ, Volume I, David L. Junchen, p. 256. Comments found on the Internet about these two theatres are all over the place, and someone local needs to spend time doing a bit of serious research at the Mansfield Public Library to clarify their history.

also in the photo section