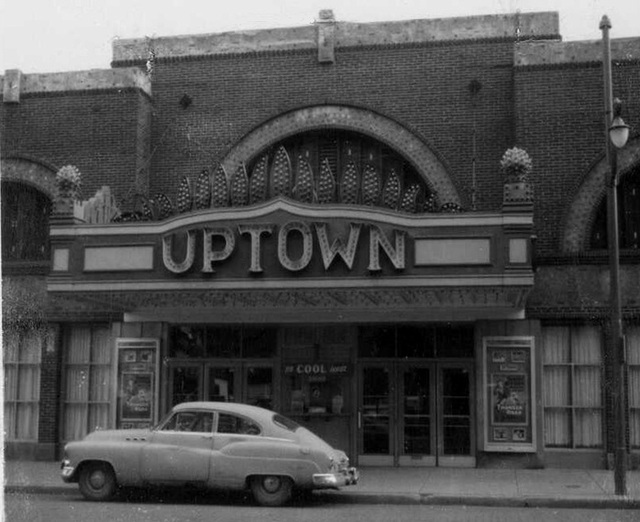 Opened as the Oxford Theatre in 1921, by Friedstein & Rubin, this modest neighborhood house was remodeled and enlarged twice in the 1920’s, first in 1926, then again in 1929, when it was given an Atmospheric style auditorium and a new name, the Uptown Theatre. Originally, the theater could seat over 1,200.

It resembled an Italian villa, complete with scenery of the Italian countryside painted between the faux ancient Roman columns. Above, on the ceiling, while stars glittered, clouds would slowly drift by before and after the show onstage and onscreen.

Early ads for the Uptown called it “the largest and most modern Atmospheric theater in Saint Paul”. Its opening night film was Lionel Barrymore in “Alias Jimmie Valentine” as well as two vaudeville acts.

After more than half a century, the Uptown Theatre was closed in 1976, and was soon torn down, to be replaced by a parking lot.

The 1929 atmospheric remodel was done by Jack Liebenberg and Seeman Kaplan.

I worked at the Uptown all through high school in the mid 60’s as an usher. It was my first job, and I have many fond memories of working there. It was operated by a Mr. Stevens and his wife. I don’t recall the name of their company. They also owned the St. Clair theatre in St. Paul where I went to see movies often as a kid. I spent a lot of time in those days exploring the old theatre with other employees, especially the basement where the old vaudville acts prepared before going on stage. There were lots of old items left there such as dressing tables. I was very disapointed when I leared in had been torn down. I recently discovered that John Dillinger used to hang out there in the 30’s.