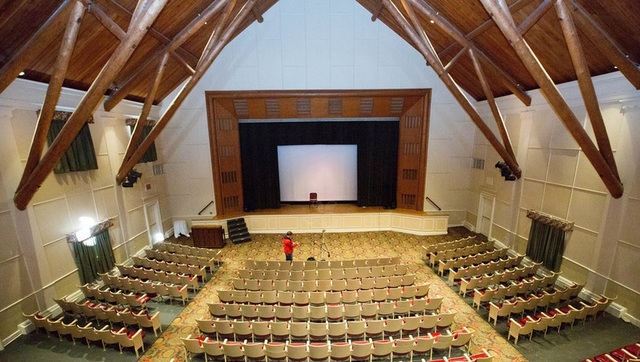 This was the first building constructed for the Moral Re-armament (MRA) in 1954. The building’s main trusses were constructed from Norway pine from Bois Blanc Island. Since the MRA was an international organization, the seats were fitted with headphone jacks. Windowed areas surrounded the theater seats, where interpreters would speak into microphones.

The theater also served Mackinac College in 1966 and as a location for Universal Studios production theater in 1979 for the filming of “Somewhere in Time”.

The entire complex became the property of Rex Humbard from 1971-1977. It became Mackinac Hotel and resort and is currently Mission Point Resort.

The theater was in use in the 1980’s for Monday movies for island residents. Though the theater was in disrepair and the projectors often broke down, island residents and summer employees would make the best of the viewings as a social event. Regular island visitor and large theater owner Jack Loeks would bring movies from his Studio 28 theater in Grand Rapids and personally introduce the movies beforehand.

The theater also served as a theater for stage productions throughout its history.

The theater is now operated by the Mackinac Arts council as the Center for the Arts. Films are shown twice a week during the summer.
Website: http://urlwww—mackinacartscouncil—org.rtrk.com/#!location/cxyf

The complete address on this is: One Lake Shore Dr, Mackinac Island, MI 49757