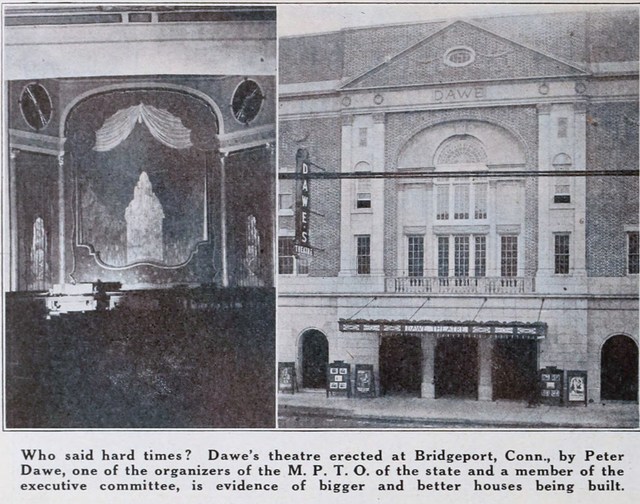 Closed June 2, 1963, and was demolished February 1964 and was located near the Housatonic Community College is now located.

One of the best days I ever spent as a kid was attending a double feature here of “Journey To The Center Of The Earth” with “The Lost World”, then spending the rest of the day at Pleasure Beach. What more could a kid ask for?

I should mention that, through most of the fifties, the “WARNER” was tied in with the “MERRITT” on Main street in the North End, both showing the same double-bills.

There was an ad for Warner-Merritt in the 11/18/47 edition of the Bridgeport Telegram. The feature was “That Hagen Girl”, a creepy film starring Ronald Reagan and Shirley Temple. At the end of the movie, you can’t figure out if Ron is her father or her boyfriend.

Opened 17 August 1938 and the architect was John Eberson.

The seating capacity was listed in the Film Daily Yearbooks;1941 & 1943 editions as 1,415. They also list it as being operated by Warner Bros. Circuit Management Corp., as was the Merritt Theatre in Bridgeport.

The Redevelopment agency announced yesterday it has acquired the Warner theater building, 343 State Street just east of Lafayette Street, in the “core” area of the State street urban renewal project. A deed on file In the town clerk’s office listed the purchase
price at $160,000. James H. Tobin, manager of the theater (and also of the Merritt theater on upper Main Street) said the Warner will close its doors after the final film presentation on Sunday night. A co-feature of the presentation is “The Last Sunset.”

Personal equipment, such as projectors, sound equipment and office furnishings, will be removed from the Warner theater within a month after the closing on Sunday, it was indicated. Purchase of the Warner theater, announced by Redevelopment Coordinator Joseph M. Dearborn, was made from the Connecticut Theatrical corporation, formerly the Warner Brothers Theaters, Inc.

I remember seeing “The Ten Commandments” at the Warner-had to sit in the balcony it was so crowded. Also, for a Vincent Price thriller they strung a line from the balcony down to the orchestra with a skeleton moving up and down!

One of the last movies I saw there was “It Happened in Naples”, with Clark Gable and Sophia Loren.

Bridgeport should still have the Warner!

Peter S. Dawe opened his third and final cinema in Bridgeport as Dawe’s Theatre in 1921. He took over the Bijou in 1910 and built the Palace in 1912 on the city’s east side. But the theatre carrying his name was sold and became the Cameo Theatre in 1924. On September 19, 1925, it became Warners' Cameo as part of the Warner Brothers Circuit. Warner would change the theater to the Warner Theatre. An explosion on April 12, 1963 during “Prince of Peace” closed the theater for a few days but just weeks later it would close for good going out with “"The Last Sunset” on June 2, 1963. Demolition occurred February 1964.