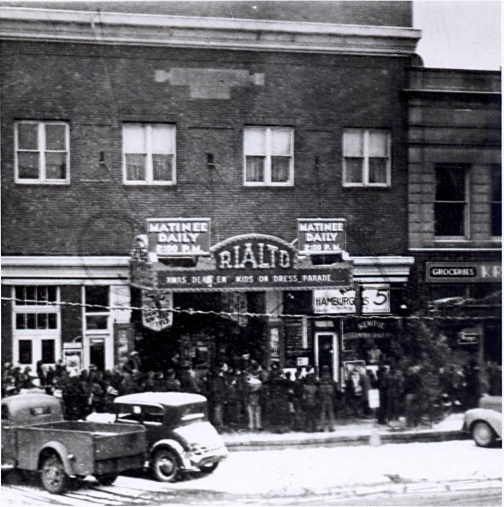 The Rialto Theater was operating from around 1920 to 1955 or later.

Under the theater name in the first photo Bill linked to there is a plaque reading “Clay W. Metsker, Owner”. The Rialto must have been the project mentioned in the May 8, 1920, issue of Indiana Construction Recorder, which said that a two story theater, 42x126 feet, was being built at Plymouth for C.W. Metsker. The architect was R.L. Simmons of Elkhart.

The Rialto Theatre building is listed on LoopNet as being at 209 N. Michigan Street, but it is currently off the market.

This RootsWeb page about the Metsker family mentions Clay Metsker’s Rialto Theatre, and says that the groundbreaking for the project took place on April 5, 1920.

On April 21, 2009, the South Bend Tribune reported that a fire the previous Sunday had caused $500,000 damage to the Rialto Theatre building and adjacent structures in Plymouth. The owner of the building said that repairs would probably take 45 days, but in the Google Street View of the building, dated August, 2009, one of the storefronts still had its windows covered up, though the other store in the building was already open again.

The article gives the address of the building as 207 N. Michigan Street, but it also covers the lot at 209. The ground floor has been converted entirely to retail use. I’ve been unable to find a closing date.