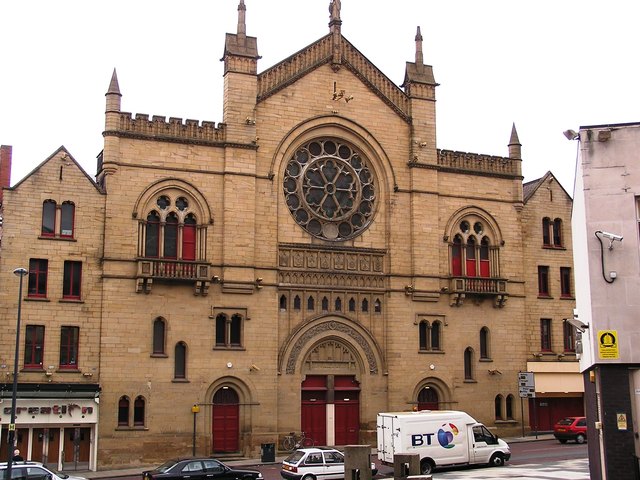 Located in Leeds city centre on Cookridge Street at the corner of Portland Crescent. The Coliseum was built as a concert hall, which opened on 15th July 1885. The Prince & Princess of Wales (the future King Edward VII and Queen Alexandra) attended the opening ceremony. It was designed in a Gothic Revival style by architect William Bakewell of Leeds. This ecclesiastical design is similar to the Grand Theatre in Leeds, and was used in an attempt to give an air of respectability to the (then) straight-laced citizens of Leeds. It was never a church, though it had a ‘straight’ organ manufactured by Abbot & Smith. It was converted into a theatre in 1895.

In August 1908 the Coliseum was hosting a season of moving pictures from the International Moving Picture Company, and this continued until January 1909. Films were again presented from April 1909. In 1920 the organ was rebuilt to the plans of Abbott & Smith and was now a 4Manual console with the organ pipes above the stage. The Coliseum Cinema was operated by the New Century Pictures circuit. They were taken over by the Denman/Gaumont British Theatres chain in March 1928. The seating capacity of the Coliseum Cinema was 2,702.

It was closed on 30th April 1938 for internal alterations in an Art Deco style to be carried out to the plans of architects William Edward Trent, W. Sidney Trent and Daniel Mackay. It re-opened as the Gaumont Coliseum on 24th October 1938 with Walt Disney’s “Snow White and the Seven Dwarfs” and Gene Autry in “Rhythm on the Ranch”. It had a reduced seating capacity of 1,746 seats. The stage and exterior remained as originally built.

The Gaumont was closed by the Rank Organisation on 23rd December 1961 and was converted into a Top Rank Bingo Club. This operated until December 1969.

The building was then taken over by the Playhouse and was used as a rehearsal room and box office for that theatre. They later moved out and the 1938 interior of the building was removed. The Gothic Revival style exterior was Listed by Leeds City Council on 25th June 1975. The building re-opened as a film and TV studio for Norwood Productions and was re-named Norwood Studios at the Colosseum. From 31st October 1992 it became a nightclub named Colosseum. It then became the Town & Country Club which closed in 2001. It re-opened as another nightclub named Creation which closed in February 2007. It was taken over by the Academy group in November 2007 and after refurbishment re-opened as the Carling Academy in November 2008. The sponsorship was later changed to O2 and it now operates as the O2 Academy Leeds.