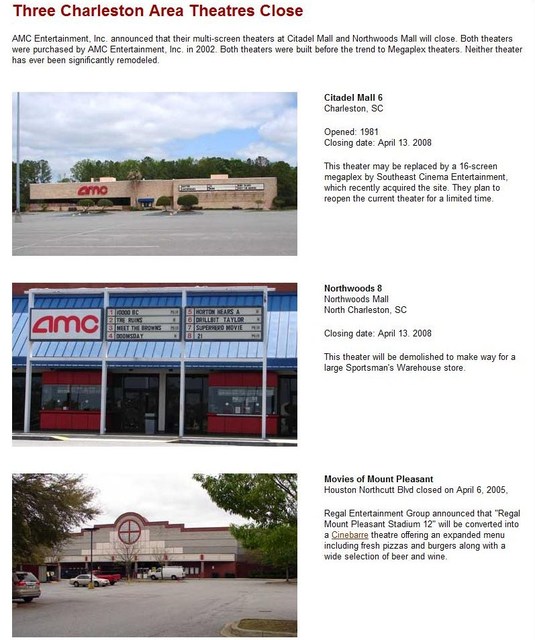 One of several theatres in the greater Charleston area that was owned and operated by General Cinema Theatres (which also operated the Ashley Landing Cinemas and Citadel Mall Cinemas). The theatre opened in the mid-1970’s as a triplex.

This movie theatre opened in the early 1970’s as a twin cinema,under the General Cinema banner.

The freestanding General Cinemas Northwoods 8 was sold to AMC and closed in 2008. Plans were originally announced by a developer who purchased the property for the building to be demolished and replaced by a big box retailer. This never materialized and subsequent tentative plans were announced in late 2009 for the cinema building to be acquired and expanded by Southeast Cinema Entertainment of Charlotte, NC. The company hopes to reopen Northwoods as a 13-screen cinema.

To clarify the newest Northwoods Stadium Cinemas is the 3rd theater to be operated on the property. The original cinema was a twin theater located inside the mall just inside the mall entrance next to Sears (where Books-A-Million) us currently located. It was operated by a number of movie companies including Plitt and Cineplex Odeon before it closed. The theater was too small to compete with others popping up around the area. When the mall was remodeled and expanded in 1985, General Cinemas decided to build an 8-screen freestanding megaplex in the parking lot adjacent to the newly constructed Thalhimers department store (now Dillard’s). General Cinemas was sold to AMC and ultimately AMC closed the Northwoods 8 Cinemas and it was acquired by Southeast Cinema Entertainment of Charlotte, NC who is in the process of expanding the building by adding additional screens and remodeling the existing building. After AMC closed the cinemas, it was originally to be raised for the construction of a Sportsmen’s Warehouse store but those plans never materialized and the space was sold to Southeast Cinemas.