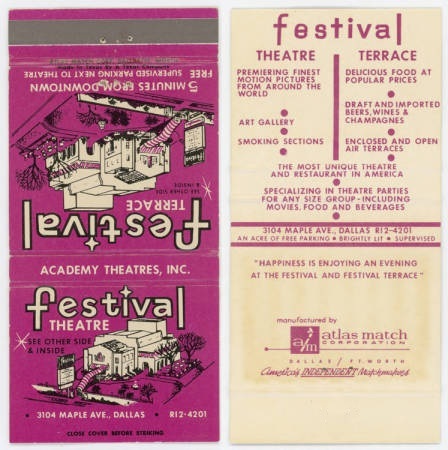 The Dallas Little Theatre was built in 1922 as a live theatre. It went dark during World War II. The Panamericano Theatre was opened in October 1943 screening Spanish language movies. It was remodeled and became the Festival Theatre on September 20, 1965. It’s movies days ended in July 1981. It went back to presenting live theatre but this was short lived and it finally closed November 1981. It was later demolished.

An old movie theater ad from 1949 for the Panamericano Theater in Dallas.

The opening of the Teatro Panamericano was noted in a brief article in Boxoffice of October 16, 1943. The house had hosted an invitational preview the previous Monday, and had opened to the public the following night with the Mexican film “Â¡Ay Jalisco, no te rajes!” and live performances by popular Mexican entertainers.

I was a projectionist at this theatre in 1972-73 when it was the Festival Theatre showing Spanish-language movies. This was quite a theatre in it’s heyday with a huge backstage area for live shows and a restaurant along the side. J.J. Rodriguez was still running it when I worked there and he was one of the best bosses I ever had; a true Padrone.

jamestv, do you know anything about the Auto-Vista Drive-In owned by Mr. Rodriguez and referred to in the Boxoffice article posted by Tinseltoes? I had never heard of this theatre before reading this article. I don’t think it ever advertised in the Dallas papers, at least not consistently.

matt54, the Auto-Vista Drive-In was never mentioned or talked about by Mr. Rodriguez or any of his sons—-it may have been a short-lived business before the ‘70’s.

So sad to hear this theatre closed down. We watched a 3D Film here in the 70’s.

The Little Theater was built in 1922 as an adobe 2-story live theatre. WW-2 found community theater in decline and the theater went dark. It was renamed the El Panamericano by new operator J.J. Rodriguez in October 1943 showing Spanish language films. Rodriguez then closed Cine Azteca, Dallas' first Spanish language movie theatre which had launched in 1937 because the diminutive theater was often well above capacity. Rodriguez operated this mega-successful movie theater appealing to what was known as the Little Mexico neighborhood in Dallas. But in 1965, Rodriguez got some business advice and rebranded the property to appeal to a more upscale audience. The Panamericano owner rolled the dice closing the theater temporarily and moved itself from middle class Hispanic theater to a high-end Festival Theater art house with adjoining Festival Lounge and Buccaneer Terrace. It opened Sept. 20, 1965 to sold out audiences. That didn’t last.

Meanwhile, Rodriguez took over the flagging Chisolm Trail Drive-In in Grand Prairie to continue his Spanish language film exhibition rebranding the ozoner as the Auto Vista opening March 29, 1965 with “La Bandida” and “Suenos de Oro.” (The Weisenburg Circuit would take over the short-lived Auto Vista and re-rebrand it as the East Main Drive-In, returning it to English language films.)

Rodriguez admitted that the high risk remodeling of his Panamericno to the Festival proved to be a mistake as the Hispanic population was moving out of the area and Oak Cliff audiences gravitated to the Stevens Theatre which had changed to Spanish language film and not the Auto Vista. The Buccaneer Terrace was closed shortly into its run. In 1968, Rodriguez tried changing to double feature adult art content and reopened the Terrace. But the property struggled and Rodriguez reverted to Spanish language film. But even that marketplace had changed with the Stevens king and – by the late 1970s – several more Spanish language theaters entered the DFW market and Little Mexico was virtually gone. The Festival was on life support and though Rodriguez managed to make it into July of 1981 he sold the Festival to real estate investors. A final live play was staged at the theatre as a last hoorah for the property in Oct. and Nov. of 1981 rekindling its roots as the Little Theater. The theater was demolished but is one of Dallas' most important cinema treasures for serving generations of Hispanic moviegoers.

I keep reading that this theatre only ran American independent films for that one brief year in 1965, but other data shows they ran this style of programming into the 70’s. see this D Magazine listing for “New American Cinema” from 1975 http://www.dmagazine.com/publications/d-magazine/1975/january/keeping-up-a-select-guide-to-entertainment-in-dallas

For more than seven years, the New American Cinema began using the Festival for late night Saturday and some Sunday matinees of what were considered “underground films” in December of 1968 and running into 1976. Maurice Levy scheduled the screenings using cult classics (e.g,. “Freaks” and “Reefer Madness”), repertory fare including classic cartoon shows and serials, experimental and independent contemporary films that just wouldn’t get booked elsewhere (e.g, “White House Madness” in 1975). The regular art run for the Festival wasn’t one year; it started in 1965 with first-run, changing to art double feature second-runs in 1968, but bookings change over to Mexican Cinema after a brief hiatus in October of 1971 — other than the New American Cinema special screenings. Not wanting the remodeling to go to waste, Rodriguez used the tagline, “Cine Mexicano de lujo” or “Mexican Cinema of luxury” in ads to provide brand differentiation from the Stevens Theater which had swiped away Rodriguez’s audience when the Panamericano switched to art fare back in the 1960s.

I am proud to have been part of the “final live play” that “was staged at the theatre as a last hoorah for the property in Oct. and Nov. of 1981 rekindling its roots as the Little Theater.” We were Actors Ensemble and the show was “Equus” directed by Marilyn Stults. I remember the theatre was always cold inside and the backstage area and dressing rooms were cramped, spooky, and dimly lit, but you could feel the ghosts of it’s Little Theatre roots. I also remember Ms. Stults trying valiantly (and in vain) to rally the preservation effort to save the theatre after our show ended, but we were locked out and the theatre got demolished all too soon. The land sat vacant for years after. It felt as though the developers were racing to tear it down, but not replace it with anything. As with so many historic buildings its' rushed demise felt cold, greedy, and unnecessary.