Heinz Hall for the Performing Arts 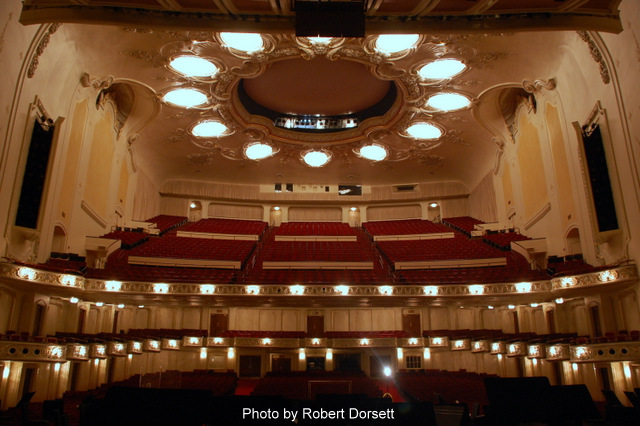 Loew’s & United Artists Penn Theater was constructed on the site of the 19th Century Hotel Anderson, which was demolished in 1925 after nearly half a century. Marcus Loew selected the Chicago architectural firm of Rapp & Rapp to design his Pittsburgh house, which was called the greatest movie palace to be built between Chicago and New York at that time.

Built in the Rapp brothers' usual French Baroque style, the Loew’s & United Artists Penn Theater could seat 2,669, and matched the grandeur of their most opulent theaters in Chicago or New York. The 50-foot lobby with a grand marble staircase was ringed by tall gilded Corinthian columns, and European crystal chandeliers hung from its ceiling. Artwork by Renaissance masters hung on its walls.

The spectacular auditorium was equally as impressive, its towering proscenium arch decorated with gilding, and the cove-lit ceiling hung with chandeliers. The Robert Morton unit organ with 20 ranks was opened by organist Dick Leibert. It was sadly destroyed in a flood in the late-1930’s, and was hailed as one of the largest of its time.

On opening night, September 6, 1927, a live stage show and vaudeville acts headed by Ted Lewis & His Orchestra preceded the main feature Lew Cody in “Adam and Evil”. It was hugely successful, and soon the Loew’s & United Artists Penn Theater was nicknamed Pittsburgh’s “Temple of Cinema”.

However, by the 1950’s, the Penn Theater had begun to slide into decline, and, with competition from television, had a harder and harder time filling its seats. Unable to turn a profit any longer, it began to fall into disrepair. The Penn Theater finally closed in 1964.

After sitting vacant for a handful of years, the Penn Theater was slated for demolition to build a new parking lot in its place. However, in 1967, the then-homeless Pittsburgh Symphony Orchestra stepped in at the right time, and saved the Penn Theater.

It found the faded but still grand old movie palace to be exactly what it was looking for, and a massive $10 million reconstruction and restoration project began, transforming the Loew’s Penn Theater from a movie theater to an orchestra hall.

While most of its original features were restored to their original appearance, the most noticeable change, at least to the exterior, was the removal of the old marquee and the moving of the main entrance around the corner onto Penn Street to what had formerly been a diner, and transforming the old main entrance on 6th Street into a huge 40-foot tall window, which extended the original arched window to ground level.

A new five floor addition to the rear of the building extended the stage space, as well as adding more dressing rooms, rehersal space and music library.

On September 10, 1971, the new Heinz Hall for the Performing Arts had its grand opening, amidst a great deal of ceremony and celebration, with many of the city’s government officials on hand, as well as celebrities like Marion Anderson, James Earl Jones, Gregory Peck and Agnes de Mille. The new hall’s namesake, Henry J. Heinz II, gave an address.

In 1995, Heinz Hall, was given another renovation, costing over $6 million, which provided a new orchestra shell, enhanced acoustics, state of the art lighting and sound equipment, as well as new gold leaf, new carpeting and auditorium seats.

The spectacular Heinz Hall remains the home of the Pittsburgh Symphony Orchestra, as well as the Pittsburgh Youth Symphony. Along with the nearby Benedum Center (the one-time Stanley Theater), the Heinz Hall is the centerpiece of the city’s reinvigorated and lively Cultural District. Every year, more than half a million guests attend Symphony concerts, children’s concerts and touring Broadway shows at Heinz Hall and its neighbor, the Benedum Center, making it one of Pittsburgh’s greatest treasures.

Lupe Vélez appeared here in person in March 1929 along with the film she starred in, D.W. Griffith’s last silent film which was also a part-talkie, Lady of the Pavements. NEWSPAPER AD from March 30, 1929.

I love this theatre. As a member of Pittsburgh Ballet Theatre and Pittsburgh Civic Light Opera I had the pleasure of performing here from 1975-1980. One of the most beautiful theatres I have ever performed in. Front of house, backstage, perfect. Returned to Pgh in 1999 for a visit and was given a tour of the theatre so that I could stroll down memory lane

I am not old enough to ever see a movie here. However, I did see several live shows. I recall hearing a story that the premiere of the made-for-tv movie “Fighting Back: The Rocky Bleier Story” (1980) was shown here. It was embarrassing however because one of the projectors broke down that night, and they had to resort to showing most of the movie with just one projector. This meant bring the house lights up for several minutes in between reels while the next part was threaded.

Click here for an exterior view of the Loew’s United Artists Theatre in 1931.

does anyone remember the lower lobby portion (downstairs) of the Penn Theater? I seemed to remember going to a few films there in the early 60’s, and seem to recall a pretty good sized water fountain in the middle of the lower lobby—not a fountain you drink from, just a decorative flowing one. Any information? Or, am i confusing this with another downtown theater in the 60’s?

Although I am late in responding to your question, I worked as an usher for the manager, Larry Knee and Asst. Manager Ron Mc Clellan from 1960 to 1961 when I went in the service. As you entered the theatre, directly in front of you was the concession stand which was the center of the lobby. There was a water fountain but is was off to the left of the concession stand. Working at the Loew’s Penn was one of the most enjoyable experiences of my life. I was working there when the Musketeer’s appeared. Rest in Peace Annette.

I saw a lot of movies at the old Loew’s Penn, including the original roadshow release of “Cleopatra” (1963), which I saw there several times, sometimes when there were only maybe 20 or 30 people, at most, in that cavernous space, clustered in the central section of the orchestra seats downstairs. Perhaps the last hurrah for business there was the Christmas 1963 release of Disney’s “The Sword in the Stone,” which was very popular. After that, it played mostly reissues. I think I saw “South Pacific” there, sometime in early 1964. After that, it was empty, with the name of its last attraction, “Ensign Pulver,” lingering on the marquee for years.

I plan to see this theatre this summer.

Description has the wrong opening date…theatre opened September 6, 1927. It was to have opened the day before, but Marcus Loew passed away that day and the opening was delayed in respect.