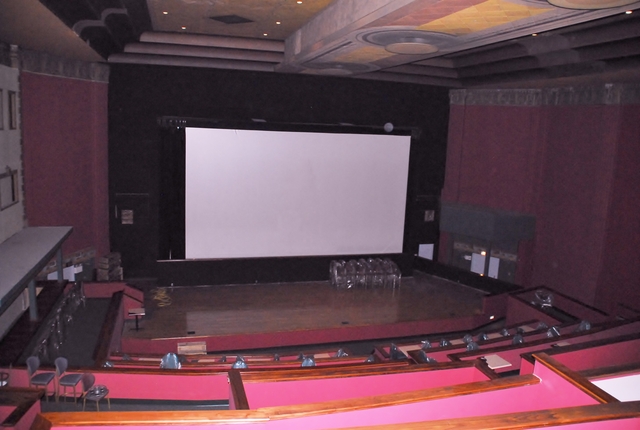 Built by vaudeville theatre magnate Sylvester Poli, the Poli Theatre opened on September 2, 1907 and was built for a then monumental sum of $250,000. A large vaudeville house, the Poli Theatre seated more than 2,000 patrons in orchestra, balcony and 2nd balcony levels.

The Poli Theatre was later acquired by the Union Theater Company in 1924.

On October 6, 1930, the theatre began showing movies only and was renamed Ritz Theatre. In 1937, it was remodeled in an Art Deco style and renamed again as the Comerford Theatre from September 16, 1937. The seating capacity was now 1,600 after the 2nd balcony level had been removed. By 1941 it was operated by Paramount Pictures Inc. through their subsidiary Frank Walker. It was remodeled with a new interior designed by B. Allman & Company of New York, and reopened on May 5, 1950 with Lizbeth Scott ‘Scranton’s Own’ in “Paid in Full”.

The theatre lasted for decades and in its last years was a dollar house struggling against a local UA multiplex. In 1978 the main floor was converted into a mini-mall, and the theatre operation was in the former balcony.

In the early-2000’s the Ritz Theatre, with its nearly 100 years of service closed.

In 2008, the Ritz Theatre reopened as a dinner theater and restaurant, with a piano bar and club with live performances. However this was a short lived venture. In late-2016 it was taken over by the Crative Performing Arts Academy and presents movies for its students. It reopened to the general public in March 2017.

I lived in South Side Scranton form 1964 to 1969 and walked downtown many times to see movies at the Comerford.[ and the other two downtown theaters the Strand and the Center] Years later in the late 70s or early 80s I went back to Scranton to visit and went downtown to go to the movies there and the theater was open but they were just using the old balcony as the movie theater.If I remember correctly the first floor had been converted into some kind of shops etc. It was good to see the old balcony area again and it brought back alot of memories. I had my daughter with me and tought it was really neat that she was going to the movies some place where I had gone as a kid.[even though it was just the balcony]I don’t remember what movie we saw but it was a normal movie that kids could watch, not somthing X rated.I had forgotten untill I read other enteries on this site that the name had been changed to the Ritz.I don’t have family in Scranton amymore and haven’t been there for years,so I don’t know if it’s still open or not.

Testimony in a 1911 lawsuit involving the Poli Theatre at Scranton reveals that the architect of the house was Albert E. Westover. The testimony was published in volume 80 of the legal journal Atlantic Reporter.

This web page has a very early photo of the facade of the Poli Theatre in Scranton as is was originally designed by Albert Westover.

My wife and I just signed a seven year lease on this theater with the goal of getting this theater back open. We own the Creative and Performing Arts Academy of NEPA with about 300 kids grades Pre-K through 12th. We are in the process of securing a $100K grant to replace the HVAC in the theater. It looks very strong we will get it and knock wood, we will be open for public performances by March 2017. The school moved in Sept 2016.

We also have installed a hi-def video projector and have begun showing movies for our students. They look amazing. If you are in Scranton, come visit us or check out our website capaa.org.

If you run this site, please change the status to open. I’d love to update you on our progress so you can share it with your readers.

Since 1978, when the main floor of the Comerford Theatre was converted into a mini-mall, the Ritz has occupied only the former theater’s balcony, so the listed seating capacity of 1,600 is vastly overstated.

Michael Comrford had bought an interest in the Poli Theatres in Scranton and Wilkes-Barre in 1924, but it was when he formed a partnership with Paramount-Publix in 1930 that the Poli was renamed the Ritz, following a renovation.

An article in the May 31, 2009, issue of the Scranton Times-Tribune says that the far more extensive remodeling (almost a complete rebuilding) creating the theater as it existed until 1978 didn’t take place until 1937. This project involved the removal of the Poli’s gallery, the rebuilding of the balcony, an enlargement of the stage, and the construction of the new Art Deco front of glazed tiles. The reopening of the house as the Comerford Theatre took place on September 16, 1937.

This reopened as the Ritz Courtyard on November 15th, 1978 with the world premiere of “Magic”. Grand opening ad posted. 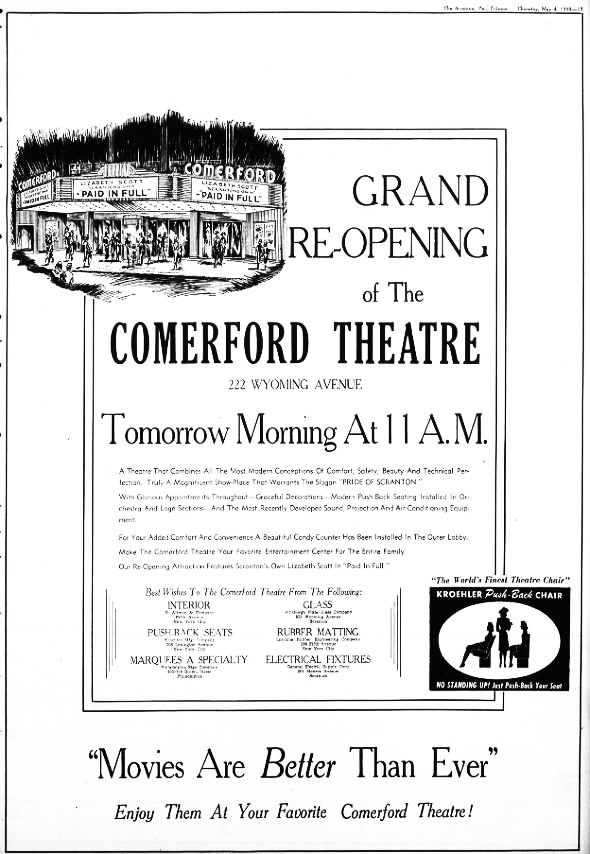