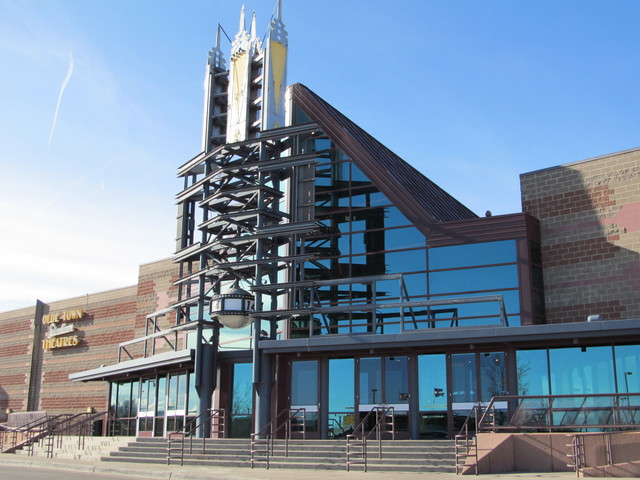 The theatre was originally built by Mann Theatres out of California. Mann later sold all their Colorado interests to Colorado Cinemas.

This is now an Landmark. It opened as a Mann, which became Colorado Cinema, which was bought out by Kerasotes in 2007, which sold all but three theatres to AMC in 2010. AMC had to sell some theatres in the Kerasotes deal and this one sold to Landmark.

The web site of Behr Browers Architects, designers of the Mann Arvada 14, features a slide show of the theater. It must have been remodeled to accommodate the all-stadium seating it advertises, as the auditorium photos in the slide show have regular sloped floors.

Despite Landmark’s branding as an “art house” chain, the Olde Town’s bookings have remained resolutely mainstream. One constant since the theatre’s opening: the cool, giant-sized photos of early day Arvada in the lobby, a nice local touch!

This theatre was opened in 1996 by Mann Theatres. I was one of the original employees. We opened this with a lot of love and care, and to this day it remains “the baby” to many of the staff that worked there. We trained the employees at the Cherry Creek theatre eight weeks prior to opening! Brandi Campbell was the General Manager for several years before becoming the manager of the Denver Colorado Mann Theatre district. This was a GREAT and FUN place to work. We all loved it, and some of us still even keep in touch.

Information can be found at their official website: www.landmarktheatres.com.

Nothing new, but to sum up the timeline, this is the Landmark Olde Town Stadium 14.

•In 1995, it was announced as an $8.5 million project called Mann’s Olde Town Cinema launching in 1996 and winning the Best New Cinema in Westword’s Best of Denver: 1997.

•In 2007, it became Kerasotes Theatres property when the circuit bought the, then, 125-screen Colorado Cinema circuit in March of 2007. It goes to stadium seating in a remodel as the Olde Town Stadium 14.

•Also in 2010 and within two months in May of 2010, it was ordered divested by U.S. Department of Justice as one of nine theatres that would be force sold.

Have to change the header to Harkins Olde Town 14: http://www.denverpost.com/2017/04/11/harkins-theatres-arvada/