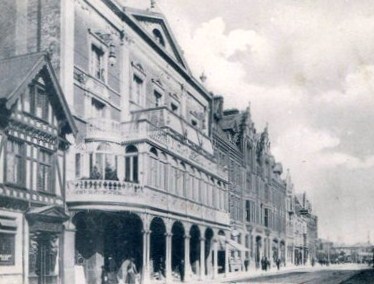 The New Theatre Royal in Portsmouth was originally a conversion in 1856 of the Landport Hall. On an enlarged site a new theatre, incorporating only a small part of the former structure opened to a design by theatre architect C.J. Phipps. Much of the new theatre had been built around the old, so that although demolition of the original structure began on 19th May 1884, the new theatre was able to open just three months later on 4th August. Such was the success that in 1900, noted theatre architect Frank Matcham was engaged to enlarge the Theatre Royal and it duly closed in April 1900.

Matcham retained the frontage, foyers and two upper levels of the Phipps theatre and built a new stage further back than the original. He then elongated the auditorium, extending the Dress Circle forwards and placing a series of boxes in what had been space occupied by the stage. The stage at 65 feet deep was one of the largest in the provinces, and the theatre accommodated nearly 2,000, although it should be remembered that those in the pit and the balcony would have been in cramped conditions on benches. The theatre opened on 6th August 1900.

Although films had been included in some of the entertainments on the stage, the Theatre Royal was largely a live theatre until 7th March 1932 when a season of "talkies" commenced. Due to the very large stage, rear projection was utilised from a box constructed at the back of the stage. Apart from occasional Pantomimes, the Theatre Royal continued as a cinema until 1948 when it returned as a Variety Theatre. This did not last long and by 1956 it had closed, only to be reopened the following year as a Repertory Theatre which lasted until 1959. It then served as a venue for wrestling until, in 1966, the Pantomime from the Kings Theatre Southsea transferred for a short run.

The Theatre Royal was then closed and was regarded as a site for redevelopment. In 1971, the Ken Russell MGM musical film “The Boy Friend” starring Twiggy and Christopher Gable was filmed entirely on location at the Theatre Royal. There are some very good views of the theatre in many of the scenes, both auditorium and backstage (although the ‘dream’ sequence musical numbers were filmed on a set at Elstree Studios).

Sadly soon after filming ended, thieves broke into the theatre and stole anything of value, and in 1972 children playing with fireworks in the deserted building set the stage alight and within hours the stage and backstage facilities were totally destroyed. Finally vandals destroyed much of the interior of the auditorium which had survived the fire largely intact due to the safety curtain.

Miraculously this was not the end for the theatre, as the Theatre Royal Society was formed in 1970 with the intention of saving the building. By 1980 they were able to establish the New Theatre Royal Trust Company who purchased the theatre and by 1984, on a temporary thrust stage in front of the proscenium arch, reopened the venue. Since then there have been many improvements, most notably in 2004 when the stage was extended forward, the capacity was increased to 525 and heating was installed! The thrust stage works well due the fact that Matcham had moved the stage back, which meant that sightlines from the dress and upper circles is good (the balcony is no longer used).

Photos of the New Theatre Royal taken in March 2009 here:–