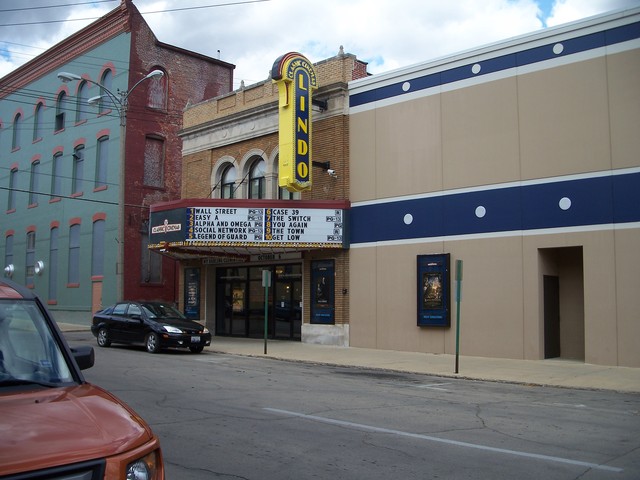 A contest was conducted to name this Rapp & Rapp designed theatre when it opened on April 17, 1922. The prize-winning name ‘Lindo’, was taken from the names Lincoln and Douglas to commemorate their second debate, which had been held in Freeport.

Seating for 1,400 was provided on one level, with no balcony. A stage was provided for vaudeville performances, with dressing rooms below the stage. It was equipped with a Bennett 3 manual 8 ranks pipe organ. It was closed in May 1934 due to financial issues, but was re-opened in February 1938. In 1939 it had a new owner and was re-named Freeport Theatre and continued until closing in 1984.

The cinema was purchased by Classic Cinemas and the name reverted back to Lindo Theatre. It was divided into three screens and in 1997 three more screens were added.

Taken from the Classic Theatres Web Site
The Lindo Theatre, designed by world famous Chicago architect brothers, C.W. Rapp and George L. Rapp, opened on April 17,1922. John Dittman, who at the time owned several other Freeport theatres built it.
The theatre had a seating capacity of 1200 all on one floor, a stage for vaudeville acts with dressing rooms below and a bennett pipe organ to accompany the films. For the Lindo’s opening an orchestra with the topmusicians in Freeport performed, as well as an organist, who was particularly skilled at playing for silent films.
A contest was conducted to name the new theatre. The price-winning name, Lindo was taken from the names of Lincoln and Douglas to commemporate their second debate. had been held in Freeport.
Silents gave way to sound and theatres entered a new era. During the 30’s several additional theatres opened in Freeport: The Patio (which is now occupied by the Stephenson County Farm Bureau). the State and the new State.
In 1939 Steve Bennis of Lincoln, Illinois, leased the Lindo, renamed it the Freeport and started a three-generation Bennis family operation in Freeport. Due to a decline in attendance the theatre was closed in 1983.
Then in September. 1984 Willis and Shirley Johnson of Downers Grove, Illinois purchased the theatre from Anthony and David Bennis, and it became part of the Classic Cinemas.
About this time multi-screen theatres were becoming more popular. Instead of having one movie in one 1,200 seat house, it was more practical to have a variety of movies to offer patrons. To accomplish this, the theatre was divided into three auditoriums seating 266 in the main or center house, and 229 in each of the other two. The dividing walls were specially constructed so that no sound can be heard from one theatre to another. The wall treatment also absosrbs some of the sound instead of the hard wall surfaces and adds a decorative touch. Each theatre had a different color scheme but shades of red and cream were used throughout.
Many advances have been made in the presentation of films. New equipment was installed which allowed the manager to put the tilm together on a large platter system and start the movie from a remote location. Also xenon bulbs replaced the old carbon arc systems and provide a better and more consistent light source. Additional heating and air conditioning was installed in the theatres and projection booths.
In the lobbies the modernizing, which had been done during the 1940’s, was removed revealing beautiful plasterwork. The parts that had become damaged due to water or partial removal were recast and restored. In the maian lobby the glued down carpet was pealed away revealing the original terazzo which was in very good shape and only needed a few patches to fill in cuts which had been made for carpeting and crowd control poles.
In 1997 three all new auditoriums were added in addition to the the theatre. They feature decor and color schemes that reflect the heritage of the theatre while providing new comfortable seats and large screens. Most recently the theatre has upgraded its sound systems, adding digital sound to the powerful HPS-4000 sound systems in four of the 6 auditoriums. A 42 inch video monitor was added in the lobby so patrons can see film previews while getting their popcorn and other concession items.

My friends and I would like to see Fahrenheit 9/11 here at our own Lindo Theater. Please see what you can do to bring this film to us.
Jante

‘Lindo’ also means ‘pretty’ in Spanish. I bet someone had that in the back of his mind when he submitted this name to the contest.

Most English-speakers will be more familiar with the feminine form of the word — Linda.

you can check out the lindo movie listings at www.freeport-il.com

I believe that the following article, appearing in the October 1, 1921 issue of Exhibitors Herald was about the Lindo Theatre, though at that time the name was projected to be the Lincoln:

“Freeport, Ill., is soon to have a theatre equal in luxuriousness and modern equipment to any theatre in the country according to advices received from John F. Dittman, veteran motion picture exhibitor of that city and well known to the industry in the central west.

“Mr. Dittman’s home town was the scene of the now famous historical debates of Abraham Lincoln and Douglas and in commemoration of this, the northern Illinois exhibitor is going to name his future cinema palace the Lincoln theatre.

“The building when finished will be the consummation of ten years planning on the part of Mr. Dittman and will include in its every feature the results of the showman’s visits to cities all over the United States which were spent in the study of various types of architecture. Only the best features gleaned by Mr. Dittman from his tour will be the basis for the new structure.

“The same famous firm of Chicago architects who are responsible tor the plans of such theatres as the Tivoli, the Riviera, and the newest Balaban & Katz house — the Chicago — prepared the plans for the Lincoln according to the builder’s ideas and it is expected that, when completed, the Lincoln will rank well up with the other houses which these architects have designed.

“At a ceremony at which many of the leading citizens of Freeport participated. Mr. Dittman on August 29 turned the first spade of earth on the site of his future theatre which was a signal for a corps of excavators to get on the job. It is said that the entire county in which Freeport is situated is manifesting a keen interest in the progress of the new institution.

“The plans call for a house of 1,400 seating capacity with every conceivable sort of modern improvement in the way of lighting, heating, ventilating and electrical devices.

“‘While I have all the confidence in the world in the project,’ said Mr. Dittman, ‘it is in one sense an experiment. The success of my venture will prove that the most expensive and elaborate of theatres are possible in cities the size of Freeport as well as in the metropolitan centers.’

“The opening date for the new theatre has not yet been set but the large force of men already at work should seem to indicate a record spurt to the finish.”