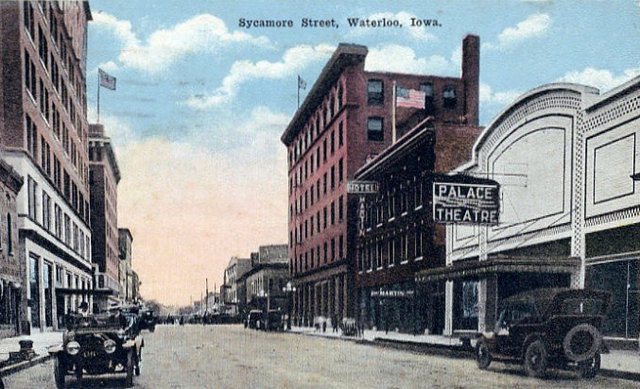 Opened as the Palace Theatre on April 1, 1914. It went under new ownership in 1948, and was renamed Waterloo Theatre from January 30, 1949. It was originally owned by A.J. Diebold. Dickinson Theatres took over ownership of the theatre in 1955, and operated it until it was closed in 1975. It has since been demolished.

The address and location shown for the Waterloo Theater is incorrect. This Theater was located at 508 Sycamore Street right across the street from the Black’s building. The web links that show pictures of this theater confirm that to me. Rodmo71 you posted that you saw the original “Star Wars” movie at the Waterloo. In actuality, “Star Wars” in it’s original run, ran at the Strand Theater on East Fourth Street (the Strand was converted into a bank after it closed). That theater was located directly across from Lincoln Park. The reason I remember this is because my girlfriend (my wife now), her sister and my little brother were the first ones in line on the opening day. We had come to the Strand almost two hours early to be sure we were one of the first to see the movie. The line people stood in for Star Wars ran all around the block. The Waterloo Theater for all my remembrances never showed porno movies. The only porno theater in downtown Waterloo, Iowa was the Mini-Cinema 16 originally located on Commercial Street and then relocated to East Fourth Street across from The Lippert Camera Company which now is the home of Jameson’s Public House. The Waterloo theater was still showing some first run movies including older classic movies such as “Birth of A Nation” right up to the time it closed, which was as posted in 1982. During the late seventies and into the early eighties it did run quite a few cult movies at midnight including “The Rocky Horror Picture Show”. I attended quite a few of those midnight showings with friends. It was quite the thing to do on the weekends and it was better than getting drunk at some bar. When I was younger I saw many great movies at the Waterloo. I remember seeing The Beatles movie, “A Hard Days Night” there when it first came to town in late 1964 or early 1965 (back then movies took forever to get to our local theaters). The theater was decked out with huge cardboard standups of the Fab Four and loud speakers were used outside the theater playing The Beatle’s music to draw attention to what was playing inside. The Waterloo wasn’t by any means the classiest of the three theaters in the downtown area when I was growing up, but I did see some really great movies there.

From my earliest remembrances of downtown Waterloo there has never been a theater located on Lafayette, at least not after 1958. My first movie going experience was at a theater on Commercial Street which I want to say was called the Orpheum. My father took me to an Andy Griffith movie called “Onionhead” there probably the latter part of 1958 (in the mid to late 70’s that theater location was turned into a porno theater called Mini-Cinema 16 which later relocated to East Fourth Street). That theater must have closed sometime shortly after in 1958 because I don’t remember ever attending a movie there again. My father died when I was three in January of 1959 (yes, It’s amazing that I can recall this even for the age I was at that time). My mother began taking my sister and I to movies from 1959 until I was old enough to attend myself, probably in 1962 when a friend and I went to see “How The West Was Won” at the Strand and no adult accompanied us. The only ones operating downtown at that time were the Strand, the Paramount and the Waterloo. As far as the Waterloo Courier’s account of the Waterloo Theater on Sycamore closing in 1975, I would have to say that is wrong. That theater was still going strong until at least 1979 or 1980. I was in the Navy from January 1974 to January 1977 and I attended movies with friends and family at the Waterloo during that time period when I came home on leave. After my stint in the service I returned to Iowa and my hometown of Waterloo and attended many first run features, classic revival movies and midnight cult movies at the Waterloo theater at least until 1978 or 1979. Now as for the existence of the Palace Theater and it’s location I’m not too sure. I’m wondering if the Strand which was located on East Fourth Street might have been called the Palace at one time. As for the listing of Jameson’s Public House, that is located at 310 East Fourth St. That location has never held a theater to my knowledge. It has always been storefront property with the old Lippert’s Camera Company being one of the former occupant’s.

I just wanted to make an addition to my earlier post. The address for the old Strand theater was 402 East Fourth Street, one block east from where Jameson’s Public house is located.

From Waterloo a vintage postcard view of the Palace Theatre before it became the Waterloo Theatre.

The earlier Waterloo Theatre at 511-513 Lafayette Avenue did exist. It was designed by Chicago theater architect Sidney Lovell, and was built in 1907. I’ve been unable to discover whether or not it ever operated as a movie house, but it was dismantled in 1936.

While the Waterloo Theatre was not an attractive auditorium, it had one of the best Cinemascope installations in the Midwest due to its lack of a balcony, which gave it an almost dead on projection angle from its booth at the rear of the house, and a curve in its screen twice as deep as other Cinemascope theatres in Iowa or Minnesota.