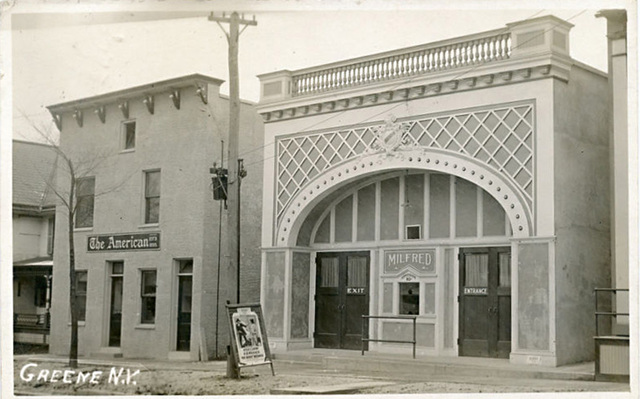 The Greene Theatre in Greene, New York opened originally in 1915 as "The Milfred" with a distinctive Nickelodeon-style arched design – so distinctive in fact that it was used as a model for a nickelodeon theatre exhibit in the Smithsonian in the 1970’s and 1980’s.

The theatre was enlarged and remodeled in the late-1930’s, with a green triangular marquee added to the front. It was closed in 1967.

The Greene Theatre was one of the more profitable small-town theatres in upstate New York and finally closed in 1967. During the 1970s, the auditorium area was filled in with concrete and used for storage, and a second story added on the same level as the projection booth, but the peeling marquee remained, as did the original lobby, box office and projection booth area.

Later, the marquee was covered over with wood shingle paneling and the entire interior converted to a florist shop, and remains in use as such today.